Demise of makgeolli casts pall on its big day

Demise of makgeolli casts pall on its big day 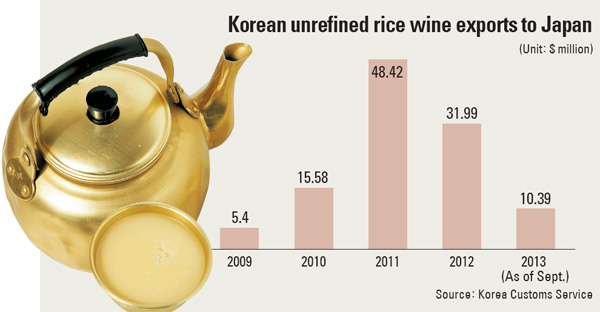 Yesterday was the third annual Makgeolli Day, where the government and companies celebrate to boost demand for Korea’s traditional rice wine. But they weren’t all smiles.

After riding the popularity of the Korean Wave in 2011, demand for makgeolli at home and abroad has been declining. One of the main reasons for a decline in exports of makgeolli is plunging demand in Japan due to the weak yen and soured Korea-Japan relations.

According to data from the Ministry of Agriculture, Food and Rural Affairs, rice wine exports peaked at $52.8 million in 2011, led by Japanese consumers. More than 90 percent of exports went to Japan.

However, the total export volume dropped 30 percent last year to $36.8 million compared to the previous year. Through August, exports fell 54 percent compared to the same period a year ago.

“The weak yen and deteriorated relationship between Korea and Japan had an affect on the decline,” said Jeong Yong-jin, a food science and technology professor at Keimyung University. “But the major reason is that Korean retailers selling makgeolli in Japan have concentrated only on raising price competitiveness instead of developing and introducing differentiated products that match well with consumer tastes.”

Industry insiders note that makgeolli makers and the government trying to promote the traditional rice wine overseas should emphasize the low alcohol content of the drink.

“The industry should take advantage of a global drinking trend that is leaning toward consuming drinks with less alcohol,” said an industry official.

What makes the makgeolli scene even gloomier is that Koreans are not consuming.

Figures show that domestic consumption also declined, peaking in 2011. That year, 450,000 kiloliters (118.9 million gallons) of makgeolli was produced, but the volume dropped to 420,000 kiloliters last year.

As part of efforts to change the depressing mood a little bit at an event to celebrate Makgeolli Day yesterday, the Agriculture Ministry tried to raise awareness of the traditional drink. At one point, agriculture ministers from Korea and France attended the event and exchanged bottles of each country’s traditional wine. A national map also was distributed to visitors that informed them of different regional rice wines.