A spectacular sunset on Vancouver뭩 waterfront. Canada offers South Korea an array of opportunities for investment and growth ?especially in the oil and gas, mining, and education sectors.

With its rich natural resources, creative workforce and stable government, Canada continues to be a magnet for immigrants, students and — especially — growing business investment from Asia. South Korea is taking full advantage of these opportunities across the length and breadth of the world’s second largest country: from Alberta’s oil sands to Ontario’s real estate boom, not to mention British Columbia’s famed educational system and excellent port services. 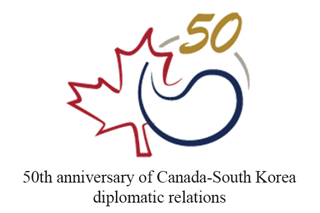 As Canada and South Korea commemorate the 50th anniversary of diplomatic relations between them, historic milestones (including the celebration of the 60th anniversary of the Korean War earlier this year) have further strengthened the economic, political and cultural bonds between these countries on opposite sides of the Pacific Ocean.

“This year, as the anniversary unfolds, I see the fruition of all the efforts of many,” says Senator Yonah Martin, the first Canadian parliamentarian of Korean descent. “It’s a very special year for that reason. Today, you can find ethnic Koreans in every corner of this country.”

British Columbia’s premier, Christy Clark, echoes the sentiments: “We are uniquely business-friendly,” she says. “We’ve doubled the number of people in our trade offices around Asia. We’re making a significant investment in this because we want to increase the number of contacts we have everyday to promote the growing inflow of investment from the continent.” 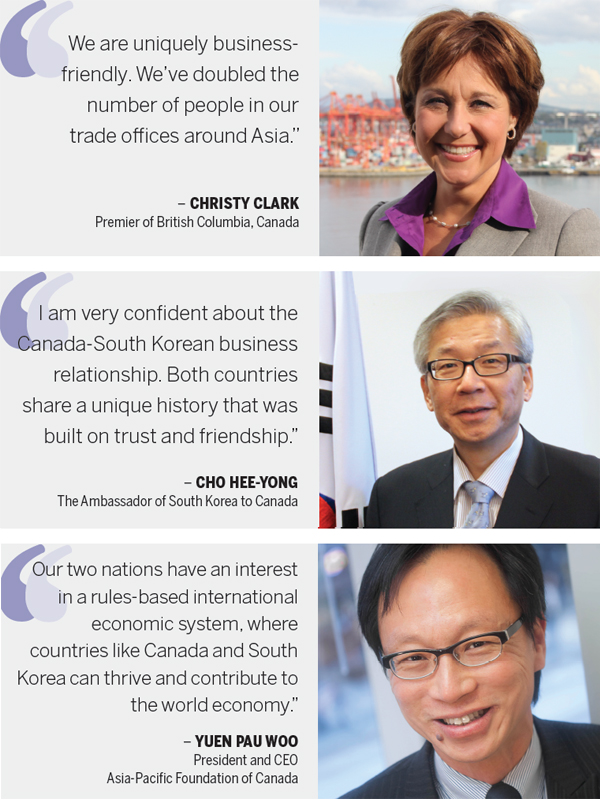 Traditionally dependent on its southern neighbor, the United States, as a market for agricultural products and oil and gas, Canada has looked increasingly eastward towards Pacific Rim countries across the ocean for capital investment.

In recent years, Canada has also become a unique partner for South Korea for oil and gas (particularly LNG), wood products including paper and pulp, rare earth minerals, lithium and uranium and food products such as meat and seafood. Both countries also look forward to strengthening their relationship further with a planned free trade agreement.

“I am very confident about the Canada-South Korean business relationship,” says Cho Hee-yong, South Korea’s ambassador to Canada. “Both countries share a unique history that was built on trust and friendship. Especially today, I am happy to see more and more people come to understand the strengths and the benefits of this longstanding friendship.”

Yuen Pau Woo, president and chief executive officer of the Asia-Pacific Foundation, based in Vancouver, works to facilitate dialogue between prominent personalities from both sides of the Pacific. “Our two nations have an interest in a rules-based international economic system, where countries like Canada and South Korea can thrive and contribute to the world economy,” he explains.

Woo says that this year’s Korea-Canada Forum, which is organized by the Asia-Pacific Foundation, will help to further bridge the gap between the two countries. Key issues — such as maintaining an open trading environment, as well as breaking down barriers to trade and investment — will be the guiding frameworks of this year’s conference.

“Trade between Canada and South Korea 30 years ago, was relatively small,” says Kim Byung Kwon, director general and chief trade commissioner of the Korea Trade-Investment Promotion Agency (KOTRA), “but since then, bilateral trade between the two countries has reached US $10 billion.”

Kim’s KOTRA office in Toronto acts as an intermediary that brings businesses from the two countries together. “We have three roles: market information and investigation, trade promotion and investment promotion,” he explains. “It is our role to help Korean companies enter a foreign market such as Canada.”

“There are still some barriers to overcome, but I am confident that Canada and South Korea’s ties will only continue to grow in the coming years,” adds Ambassador Cho. “There is still so much that both countries can offer and learn from one another, so I am eagerly looking forward to our future together.”

Learning is precisely what Korean students come to do when opting for colleges and universities in Canada. “The long-term benefit of having international students from Asia in Canada is its strengthening of relationship building,” says Premier Clark. “They come here to a very multi-cultural and safe place where everyone is welcome, and then go home and take that experience with them.”

In the meantime, Canada maintains its reputation as a fiscally conservative, multicultural nation that prides itself on its open trade borders. Its largest business and financial center — Toronto — recently surpassed Chicago as the fourth biggest city in North America, and continues to be an attractive destination for international brands and corporate headquarters.

On the other side of the country, Western Canada’s strengths in natural resources, education and tourism have also boosted the country’s attractiveness for Korean investment. Canada is home to the world’s second largest source of proven oil deposits.

Calgary, one of Alberta’s economic hubs, has reaped the benefits at a time of uncertainty for the rest of the world’s oil and gas sector.
Vancouver, the largest city in Canada’s west coast, has been dubbed the “most Asian city outside Asia”. It has been praised — along with the rest of British Columbia — as a hub for Asian entrepreneurship.

“50 percent of Canada’s trade with South Korea is done through British Columbia,” says Premier Clark. “We see South Korea as a stable and dependable partner now and in the future. Our future is in Asia, and we know that.”

*This report was produced by World Eye Reports. If you would like further information on any of the companies and organizations featured here, please email us at info@worldeyereports.com