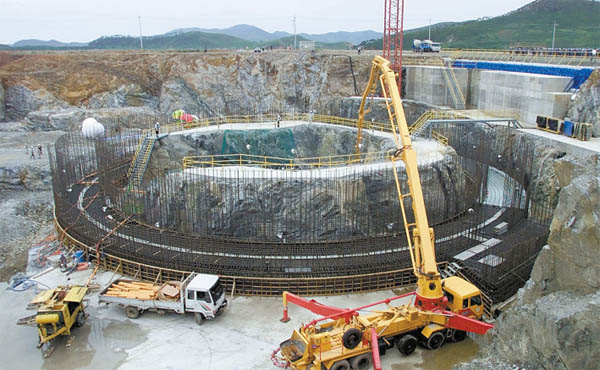 Workers pour concrete at a nuclear reactor site in the North Korean village of Kumho on Aug. 7, 2002. The project was terminated in 2006. [REUTERS/NEWSIS]

The Ministry of Unification is groaning under a massive amount of debt due to the suspension of the expensive light-water reactor project for North Korea.

“I asked officials at the Ministry of Strategy and Finance, but they refused to pay it back for us,” Kim said. “They say they are also short of budget now, particularly due to the president’s plan for expanding welfare.”

In 1994, the Korean Peninsula Energy Development Organization (KEDO), a multilateral consortium mainly led by South Korea, the United States and Japan, signed a deal to build two 1 million kilowatt light-water reactors at the North Korean city of Sinpo in return for North Korea’s abandonment of its nuclear weapons program.

Under the initial plan for construction, which started in 1997, South Korea was supposed to invest a total of about 3.5 trillion won in the project. It spent 1.3 trillion won before the project was terminated in 2006.

The ambitious scheme first came to a halt in 2002 when a U.S. delegation led by James Kelly, then-U.S. assistant secretary of state for East Asian and Pacific affairs, visited North Korea and accused the regime of running a uranium enrichment program.

As a result, KEDO members decided on a suspension of the project starting Dec. 1, 2002, and they finally declared termination of the project in May 2006, having completed 34.6 percent of the scheduled construction.

Although the project ended, the debts remained unpaid. The 1.3 trillion won that the government spent until 2006 has snowballed to 2.2 trillion won as of last month.

“We raised all of the money for the project by issuing government bonds,” said Kim Eui-do, a Unification Ministry official who participated in the project in 2001.

“We paid the interest on the bonds by issuing new bonds.”

Several ideas were suggested to pay back the mounting debt for the project, such as holding special lotteries dubbed “Unification Lotteries” or raising electricity taxes.

“Technically, we can use the Inter-Korean Cooperation Fund, about 1.5 trillion won of emergency funds allocated to the ministry,” Vice Minister Kim said. “But under current regulations, the fund can only be used when a new inter-Korean cooperation project begins. We can’t use it if inter-Korean relations are frosty.”

The desperate vice minister said he would be happy if even a small part of the debt could be paid.

The Unification Ministry, which is in charge of all inter-Korean business, is not the only government entity left holding the bag.

The state-run Korea Electric Power Corporation, which was in charge of management of the facilities and the reactors that were under construction in South Korea, has struggled to sell the unused equipment. In December 2012, Kepco finally completed selling all of the KEDO equipment, including 26 reactor parts and nine turbine generators.

But Kepco said it incurred net losses of $70 million. It spent $60 million for maintenance of the unused equipment and $30 million in compensation to partner companies after the project was scratched. “In principle, North Korea should pay back all the debts to us through KEDO,” said Kim Hyung-suk, a Unification Ministry official who participated in the project between 2003 and 2005. “It is not only us who invested in the construction. Japan, which invested in the remaining 30 percent of the construction, also had losses.”

Asked why the South Korean government raised the fund by issuing bonds, Kim said: “At the time, we expected it would take 10 years to complete a single reactor. So we judged that taxpayers at the time did not have to pay for the project, and it was the future generation who should pay. So we issued government bonds and didn’t use the state budget.

“In terms of the KEDO debts, we need to deal with this in a long-term perspective,” he said. “We should hold our right to demand repayment from North Korea and keep calling for it.”