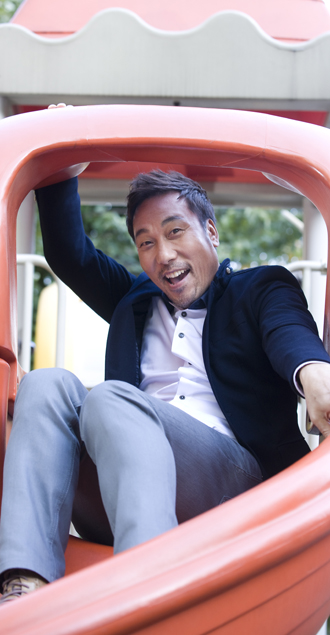 “I would like to send a slide like this to my school in Nepal, along with English books,” says Lee, photographed in a children’s playground .By Kwon Hyuk-jae

During the Chuseok holiday in September, singer Lee Moon-sae and actor Jung Jun-ho packed their bags and went to Langtang, Nepal, where the second Goodday School was being built. They packed presents to be given when the school is completed at the end of next month: books for the schoolchildren.

The JoongAng Ilbo met Lee Moon-sae, a 54-year-old performing artist with 14 albums under his belt, in a cafe recently to listen to his story.

Lee met a child whose dream was to get an education when he followed climber Um Hong-gil to the Himalayas years ago. The meeting was so inspiring that Lee established the Seollebal Mountain Club and built the first Goodday School in the Nalang region with the help of supporters in 2008. Muhak, the largest alcoholic beverage enterprise in Gyeongsang, donated construction expenses.

“The children in Nepal don’t go to school, as in Korea in the 1950s or 1960s,” Lee related. “Their biggest dream is to leave Nepal and get a job in a larger country. And the chance of that dream coming true won’t happen without education.”

Langtang is a hardscrabble place. There was no place for the school to be built. But finally a slope was flattened, and the school, playground and library were built. Children played soccer for the first time in their lives, but that wasn’t enough.

“Books to fill the library shelves was the real problem,” Lee says, “since Korean storybooks were no use to Nepalis.”

So Lee and Muhak organized a campaign to assemble a collection of books in English. “It doesn’t matter if it’s a storybook, picture book or textbook,” Lee says. “With a book, a child can see the ocean, even if he or she’s on a mountain in Nepal. That’s the power of books.”

There is no TV in either Langtang or Nalang. Even the electricity is self-generated. Books are the only way to connect to the outer world. The areas are even remote from the reach of the Nepal government and NGOs. There are lots of volunteers working near the capital of Katmandu, but few are willing to help a village that one can only reach by driving on unpaved roads for seven to eight hours.

The villagers were also doubtful at first about the school that Lee and his friends proposed to build. The representative of the youths in the village told Lee it was remarkable that someone was bringing something so generous and unexpected for them.

He named the project Never Ending Dreams. For readers who would like to make donations, English books for the schools in Nepal will be collected by the head office and Seoul office of Muhak until Nov. 10.

Q. We hear your national tour tickets are sold out.

A. When Lee Seung-cheol performed in gymnasiums, I wondered why he would do that when he is not even a rocker. But now that I have actually done it, I see the charm to it. When I performed in small theaters for consecutive days, I had to control myself and hold something back for the next day. But when I perform once a week, I can devote myself entirely, thinking, “So what if I die tomorrow.”

Did you watch Shin Seung-hoon’s episode on “Hidden Singer” (in which the audience confused an imitator with the real artist)?

I congratulated him in a text message. I said, “You finally let yourself go.” I guess Shin let the contestant win because he was good.

Why did you say you had thyroid surgery for the removal of a nodule instead of admitting you had cancer in 2007?

At that time my mother was alive. I didn’t want to startle her. I didn’t know Park Kyung-lim would talk about that on air.

How was your recovery?

The last five years was so tiring for the body to adapt to the hormone medicines. I was known for marathon conferences, but now I finish in an hour. My staff loves it.

So you became a good leader?

They call it the “grace” of disease.

When will you release your 15th album?

The single of the album is not yet ready, although the rest of the album is roughly finished. Well, it’s not mandatory to release the album for my 30th anniversary, so maybe I’ll put it off to next year.