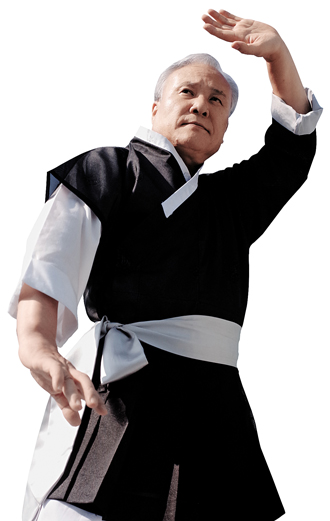 And this month, he’ll finally get the chance: The 66-year-old Taekkyeon master will perform a Taekkyeon routine to Korea’s traditional song Arirang in Los Angeles and Washington. His show, entitled “Ryeon,” in Chinese means “connecting the past, present and future.”

Taekkyeon is Korea’s traditional martial art from the Joseon Dynasty (1392-1910) in which a master uses his or her bare hands to knock a person down. In many respects, it looks like dancing.

Lee plans to perform Taekkyeon in about 70 cities across 30 countries in the next five years.

“Although people’s interest in Taekkyeon has somewhat decreased these days, globalization of Taekkyon can now begin,” said Lee, who is chairman of the Korea Taekkyon Federation. “My goal is to introduce Taekkyeon as ‘Greco-Roman-style Taekwondo’ at the Olympics.”

Greco-Roman style is a style of wrestling that prohibits holds below the waist.

“Taekkyeon is an original form of Tae Kwon Do, and ‘Greco-Roman style’ Taekwondo can be more like Taekkyeon,” Lee said.

Some critics doubt the originality of Taekwondo, claiming it is a copycat of Chinese Wushu or Japanese Karate. But Lee believes linking Taekwondo with Taekkyeon could be a good way to create a division within the World Taekwondo Federation for Taekkyeon.

“I thought it was necessary to first introduce Taekkyeon to the world through staging performances,” Lee said.

He made it to a master level, and served as an executive at the Busan branch of the Taekwondo Union. But he abruptly quit in the early 1980s.

“At the time, I believed I should get married first and just keep Taekwondo as a hobby,” he said. “But I realized my career was too good to be abandoned, so started again by researching. That’s how I found Taekkyeon.”

In 1984, Lee was operating a leather plant in Busan. To learn Taekkyeon, he sought out Song Deok-ki and the late Shin Han-seung, the country’s only two Taekkyeon experts at the time.

Afterward, Lee started a research group to study the martial art further. He closed the plant and focused on his studies for the next 30 years.

In 2007, Korea Taekkyeon Federation officially joined the Korean Olympic Committee; and in 2011, Taekkyeon was adopted as an official game in national sports competition.

“Taekkyeon’s spirit is not to hurt anyone,” Lee said. “If a leg kick hurts the rival, you get a foul. I want to let the world know not only its techniques, but its spirit.”