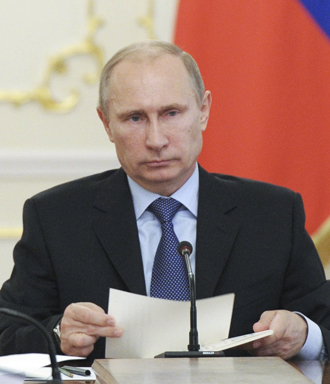 Russian President Vladimir Putin is making an official visit to Korea on Nov. 12 and 13, the Blue House said yesterday.

Putin is set to become the first leader of the four major powers - the United States, China, Japan and Russia - to visit Seoul since President Park Geun-hye administration began in February.

The two presidents had a one-on-one meeting on the sidelines of the Group of 20 meeting in Saint Petersburg just two months ago.

“Through the summit, the two leaders will assess overall diplomatic relations and discuss stability and peace on the Korean Peninsula as well as Northeast Asia, substantial cooperation between the two and measures to revitalize cultural and human resources exchanges,” said Kim Haeng, a Blue House spokeswoman in a briefing. “It’s hoped that Putin’s visit will provide crucial momentum for reciprocal progress in the two countries’ future-oriented relationship.”

The meeting between the two leaders is also expected to deal with an action plan for a new vision that President Park came up with in Seoul on Oct. 18 for regional and economic cooperation among Europe and Asia, which she dubbed a “Eurasia initiative.”

Park proposed building a Silk Road Express, a network of roads and railways running from Busan through South and North Korea, Russia and China, and onto Europe.

The third-term Russian president, who was first elected in 2000, is also known to be keen on promoting development in his country’s Far East to improve the area’s economic infrastructure.

Park’s meeting with her Russian counterpart will come as the United States and China have recently begun talks to resume the stalled six-party talks about North Korean issues and its nuclear program. Those talks, originally aimed at ending North Korea’s nuclear program, began in 2003 but stalled in December 2008. North Korea walked out of the talks in April 2009 in protest of international condemnation of its long-range missile tests.