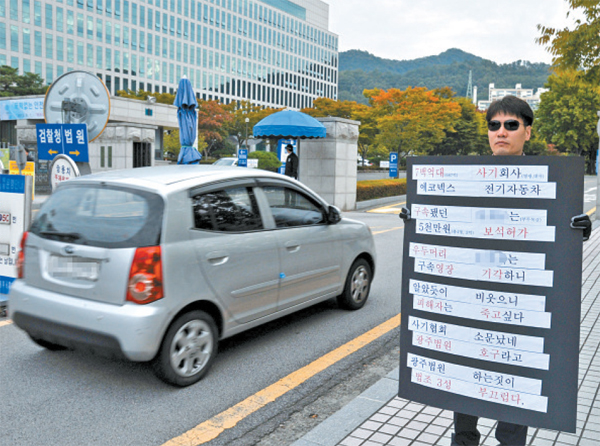 An investor in an electric car venture holds a signboard at the Gwangju District Court saying he was ripped off. [NEWSIS]

Police arrested a 59-year-old businessman Thursday for allegedly bilking 3,700 investors out of 68.7 billion won ($64.6 million) by claiming that his company had exclusive rights to a new electric vehicle technology from the Netherlands.

The ripped off investors reportedly include a high-ranking military officer and a well-known middle-aged actor, according to the police.

The businessman also hired former South Gyeongsang Province Governor Kim Hyeok-kyu as president of his local venture to lend credibility. He lured in new investors by mentioning the involvement in the investment by Kim, the actor and the military officer.

It appears the businessman truly wanted to get the Dutch technology and start making electric cars. But he never raised enough capital.

An investigation was begun after people who had lost money in the scheme filed complaints with the police last November. The police sought an arrest warrant for the accused man in mid-October, but a court turned them down, citing lack of evidence.

The arrested businessman, whose identity is being withheld, used to run a car battery store. He decided to set up an electric car company in July 2008 after he met a 45-year-old man who trades electric car components.

From the start, the businessman attempted to forge links with the Dutch company e-Traction, which is known for its basic technology for electric vehicle motors. He bought the rights to sell some products by the Dutch company in July 2009.

The time was ripe because President Lee Myung-bak was aggressively pushing the notion of ‘green growth,” promoting energy-efficient cars and equipment.

The businessman offered bonuses to employees who attracted investors. The Younggwang Police Precinct in South Jeolla arrested four of those workers earlier this year for fraud.

As the company gained momentum and investment, the accused businessman tried to strike a deal with the Dutch company for the core technology.

By the end of last year, he had raised 68.7 billion won by saying he already held the exclusive rights to e-Traction’s technology. Potential investors were also told his company had already exported 50,000 cars to the Netherlands.

But he didn’t have the technology because he only paid the Dutch company 7.4 billion won.

He spent much of the rest of the money building a factory in South Jeolla. The factory, which measures 8,856 square meters (2.2 acres), is not operational one year and four months after the completion of the building.

The Dutch company notified the Korean company that the contract was canceled because it didn’t pay the agreed amount.

Younggwang Police said that the company appeared to have spent all the money raised although it doesn’t know for sure.

“We raided the office of the company, but it didn’t have accounting records,” a source at the police said.

A lawyer for the arrested businessman said his employees might have exaggerated some information to investors but that the businessman himself didn’t spread false information.