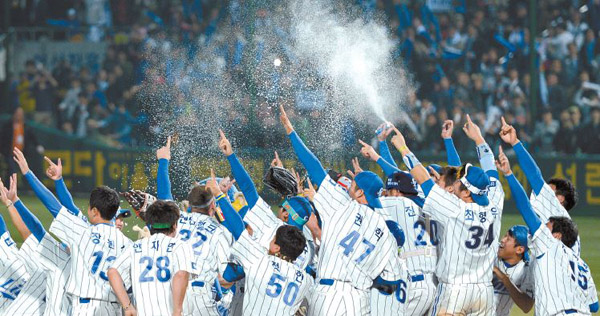 Samsung Lions players celebrate after winning the Korean Series against Doosan Bears by a score of 4-3 on Friday in Daegu. [NEWSIS]

After the Samsung Lions lost Game 4 of the 2013 Korean Series, it looked like their hope for a third consecutive championship was over. No team in the 33-year history of the Korea Baseball Organization had overcome a 3-1 deficit in the best-of-seven series. The Lions’ starting pitchers looked like they were afraid of the Doosan Bears’ batters, who had led the league in batting average in the regular season. The Lions’ batters blew too many scoring chances.

However, the defending champions never gave up, thanks to veterans who pushed the fighting spirit of the team. While veteran pitchers, such as lefty ace Jang Won-sam and closer Oh Seung-hwan, stood firm, veteran outfielder Park Han-yi awakened the team’s offense.

The Lions dragged the series to Game 7 and eventually defeated the Bears 7-3 in the final game. By winning the series, the Lions became the first KBO team ever to win both the regular season and the Korean Series for three consecutive years. It was the Lions’ seventh overall title in the KBO.

The Bears gave it a valiant push, trying to become the first team ever to win the Korean Series after finishing the regular season in fourth (the top four teams of the nine-team KBO make it to the postseason), but came up short in the end.

Jang, the Lions’ 30-year-old pitcher, struggled at the start of Game 7, having a hard time locating the outside edge of the plate. He allowed a double to the Bears’ leadoff center fielder Lee Jong-wook, who then scored off a single by left fielder Kim Hyun-soo.

But Jang recovered, and in the end gave up only two runs.

The highlight of the game came in the bottom of the sixth inning when the game was tied 2-2. With bases loaded and only one out, the Lions’ cleanup hitter Choi Hyung-woo hit a weak grounder to the third base that the Bears’ third baseman Lee Won-suk chased to about 4 meters (13 feet) from home plate. But Lee’s throw to the catcher went awry, deflecting off of Jung Byung-gon as he ran home, and going to the first base dugout. Second base runner Park Han-yi also scored on the play to give the Lions a 4-2 lead.

The Lions added three more runs later in the inning, with doubles by Park Suk-min and Kim Tae-wan, practically deciding the game.

“All of my players are MVPs,” said Lions skipper Ryu Joong-il after winning the series. “But I really wanted to thank the veterans who never gave up, even though we were behind by 3-1 in the series.”

One veteran who awakened the Lions’ offense was 33-year-old right fielder Park Han-yi, who was selected the MVP of the series, Park, was excluded from Ryu’s Game 2 lineup due to a finger injury he sustained from a head-first slide into first base in Game 1. Even though he hadn’t fully recovered, Park returned to the field in Game 3 and eventually blasted several hits and some RBI that kept the Lions in the series. In Game 5, Park hit a go-ahead two-run single in the top of the eighth, when the score was tied at 5-5, and in Game 6, he blasted a three-run home run in the bottom of the seventh, when the Lions were leading 3-2.

In Game 7, Park reached first base with a single in the bottom of the first and fifth, scoring the tying runs each time.

“I know that there are many other Lions players who deserve the MVP award,” Park said. “I really wanted to thank my teammates who never gave up and to thank my wife for her great support.”

The Bears had chances to finish the series, especially in Game 5, when they twice took the lead. But in the end, the Lions won that game 7-5, after the Bears left their starter Dustin Nippert in too long, and he gave up a two-run shot to Chae Tae-in and a three-run home run to Park. “All the responsibility for losing is on me,” said the Bears skipper Kim Jin-wook said. “Our players performed their best.”