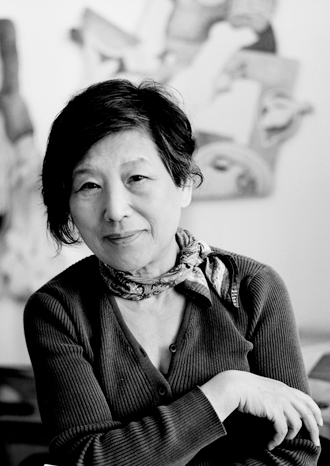 Forty-five wooden faces - some smiling, some staring, and some without features - hang on the wall. They look much like their creator, Yun Suk-nam, 74, who is often dubbed “the godmother of Korean feminism art.”

The faces are part of Yun’s solo exhibition, “I’m Not a Pine Tree,” which opened Oct. 16 at Hakgojae Gallery in central Seoul. “I hate people who name things as they want to,” Yun said about the title of the exhibition. “I think people are arrogant and selfish.”

Her petite, delicate features do not give the appearance of someone who speaks out for women’s rights. And yet, through the works that display maternal affection and the strength of women with unstable inner worlds, she expresses the beauty of females who struggle for independence.

Yun began painting in her 40s, then started working with wood a few years later.

“I found a twig in Heo Nanseolheon’s (a famous female poet from the Joseon Dynasty [1392-1910] whose life was unfortunate) house and drew a woman on it,” said Yun. “That was when I started to draw on wood.”

It surely was “Not a Fortunity but Destiny,” as one of her works suggests, that neowa, or roof shingles made of pine on Korean traditional houses, came into Yun’s hands. 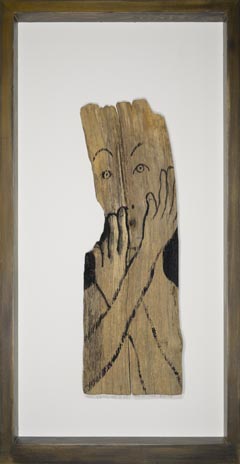 “My, That Lovely Sound!” (2013) is part of Yun Suk-nam’s works made of neowa, or Korean traditional shingles, on display at her solo show. Provided by the gallery

Yun Young-joo, the CEO of the restaurant Wood & Brick and a friend of the artist, saw a house with a neowa roof that was being torn down. He brought 80 pieces of neowa home and put them in storage. When he told Yun Suk-nam what he had found, her eyes sparkled with excitement.

She got to work instantly. She didn’t have to carve or trim the neowa, she just had to discover the faces that already resided within them.

“I almost danced when I found faces in the neowa pieces. I have found 45 features from 80 pieces of neowa. The rest of them, I couldn’t think of anything.”

The elusive forms were turned into vivid features when they went through the artist’s hands. The simple lines constituted faces when growth rings became skin and grain became smiles. With Yun’s touch, material that was bound to be discarded turned into sensuous beauties. 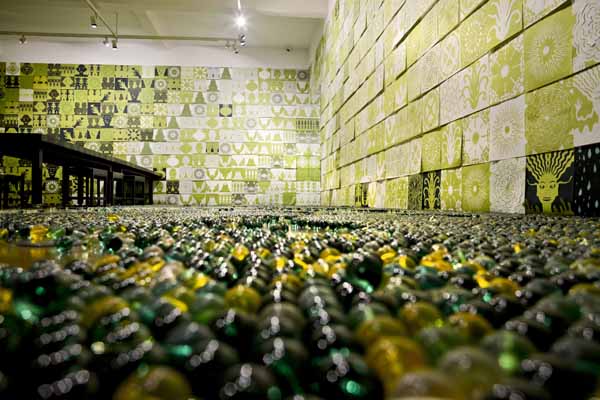 “Green Room” (2013), an installation work by Yun Suk-nam, is part of her solo exhibition, “I’m Not a Pine Tree,” ongoing at Hakgojae Gallery in the art zone east of Gyeongbok Palace in central Seoul. Provided by the gallery


Along with the neowa pieces, Yun displayed two installation works, the sequels of her previous room series. The “White Room” is where she embodied her mother’s imagery garden to cherish her memory. The “Green Room” raises the issue of people damaging nature, then consoling its soul.

Yun has worked on criticizing anthropocentric ideas and asks viewers to consider themselves a part of nature. In the same context, she carved and painted 1,025 abandoned dogs in 2009 to mourn and pray for them. The dogs are now displayed in Haein Temple, Daegu.

“I think authors should bring changes to the world, or at least I hope so,” Yun said while holding her hands in front of her chest, like a praying little girl.

More of Yun’s exhibitions will be held at the OCI Museum of Art and at Jeju Stone Park in 2015.