Retirees struggle with cost of living

Retirees struggle with cost of living 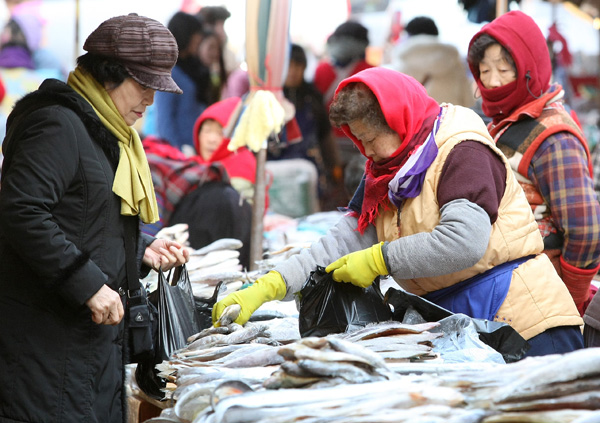 More older Koreans prepared less for retirement financially and that appears to be causing a decrease in spending, according to an LG Economic Research Institute report yesterday.

“Koreans appear to spend less as they get older,” wrote Ko Ga-young, a researcher at the institute, in the report. “Though overall consumer spending has been in decline since 2000, the downturn got steeper after the [2008-9] global economic crisis. Seniors are at the center of the change.” 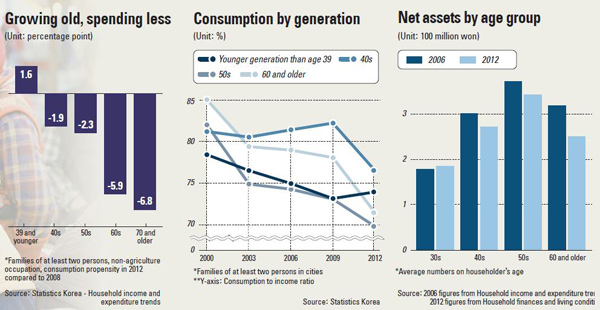 In another LG Research Institute study in May 2013, a survey of homeowners age 60 to 74 found that 71 percent of respondents said they were unable to support themselves by selling properties they own. Ko blamed unpredictable economic and social situations.

The researcher said Koreans’ life expectancy has grown quickly in the past decade. The National Health Insurance system, expanded in 1999 to cover more preventive care and medical treatments, partially contributed to the longer life expectancy, she wrote. At the same time, living longer requires additional funds for support during those additional years, she added.

The institute report also said that many older people were unable to accumulate enough savings for retirement, in part because of educational expenses for their children that started to expand in the 1990s.

That generation produced fewer children, but more was expected of them. College entrance rates peaked at 83.8 percent of high school seniors in 2008, compared to 33.2 percent in 1991, according to Statistics Korea. In particular, spending on private education jumped an average 12.6 percent annually from 1990 to 2000, when today’s sixtysomethings were in their 40s - prime earning years - investing heavily in their children instead of saving for themselves.

Among people age 60 and older, retirees with no active income appeared to reduce spending the most while maintaining higher net assets than those who run small businesses or have a regular incomes, Ko wrote in the report.

On the other hand, working seniors ended up with an annual income of 34 million won, 11 million won higher than retirees who largely rely on the value of their properties - which often fluctuates - and tightened their belts the most.

Real estate used to be considered the most stable investment as Korean house prices kept rising despite the 2008 global financial crisis, which dragged down housing prices worldwide.

However, sale prices started plunging in Seoul in 2010, which slowed the annual housing price increase 2 percent between 2008 and 2013, according to a Kookmin Bank study.

In Seoul, it said, sales prices dropped 0.4 percent every year during the same period, while apartments dropped 1.4 percent. Specifically, appraised prices of houses whose owners were age 60 and over were 200 million won in 2012, 70 million won lower than in 2006, according to household income and expenditure studies by Statistics Korea.

Ko predicted that the propensity to reduce spending will last for a while due to the sluggish real estate market. Korean housing prices are still expensive in relation to average income levels.

“It would be more effective to give job opportunities to seniors by offering job positions and job training, rather than just encouraging them to spend more money by raising public pensions or expanding welfare benefits,” she said.