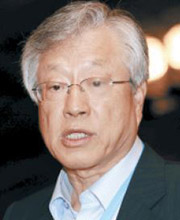 KT Chairman and CEO Lee Suk-chae submitted his resignation yesterday amid increasing external pressure on the head of the telecommunications giant formerly owned by the government, compounded by a prosecution investigation into breach of trust allegations.

Lee’s decision came a day after he returned from Rwanda, during which time the prosecution raided the company for a second time.

“I can no longer sit and watch the employees suffer, so I made a decision with the heart of the mother of the baby in front of King Solomon,” said the 58-year-old Lee in an e-mail addressed to KT employees after he tendered his resignation, likening him to the innocent mother in the Old Testament who was willing to give up her baby to save it.

Lee will remain at work until the board of directors chooses a successor.

“Until a decision is made on who will be the next CEO, I will try to get the remaining work done and help the next CEO lead KT under a new environment,” Lee said.

The prosecution launched its investigation last month after the People’s Solidarity for Participatory Democracy, one of the nation’s most active civic groups, accused Lee in February of incurring up to 86.9 billion won ($81.9 million) in losses with “ill-timed” and “ill-intended” investments. PSPD filed a similar accusation again last month.

According to the PSPD, Lee sold 39 properties owned by KT worth 1 trillion won at bargain basement prices over the past three years and used proceeds to purchase companies, including ones owned or invested in by his relative, Yoo Jong-ha. Yoo, a former foreign minister, earned 13.7 billion won from the deals, the civic group claimed.

It also said Lee added 32 companies, including major money-losers, at the price of 1.14 trillion won.

Lee, who started his second three-year term in March 2012, has been under pressure to make way for an appointee of the Park Geun-hye administration. His predecessor, Nam Joong-soo, stepped down in 2009, right after Lee Myung-bak became president. Nam resigned after the prosecution launched an investigation into an accusation of breach of trust. Lee, a former telecommunication minister, was close to former President Lee.

The Seoul Central District Prosecutors’ Office raided the residences of Lee and other executives and some KT offices on Oct. 22. Last Thursday, the prosecution raided eight KT offices.