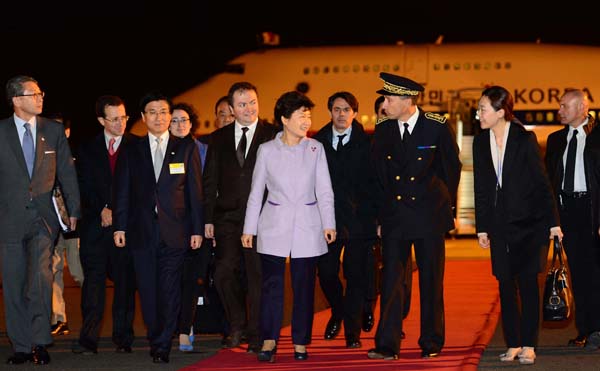 Korean President Park Geun-hye with her entourage arrives at Paris Orly Airport on Saturday for a state visit to France. [Joint Press Corps]

PARIS - President Park Geun-hye is ready to have a summit with North Korean leader Kim Jong-un if the meeting is deemed necessary for the peace and development of the inter-Korean relationship, according to an interview she had with a French daily.

But, she said, such an inter-Korean summit must stress “sincerity” and must not be held just for short-term or interim results, according to Le Figaro on Friday (European time).

The president’s tone appears to have softened since the last time she addressed the issue of a summit, in an interview with the Washington Post in May. “Of course, I would meet with him if the need arose,” she said at the time. “But what use would it be at this exact moment?”

When Le Figaro asked Park if she thought her North Korean counterpart was ready to give up his nuclear weapons, she answered that the North’s continuing pursuit of both economic development and nuclear weapons is an “impossible illusion.” With all of the internal and external obstacles faced by the North, if it continues to ignore its starving population, it will collapse.

The president also made it clear that the South Korean government has a strong position regarding nuclear issues and will not tolerate any nuclear weapons in North Korea. Together with the strong support of the international community, which is also against Pyongyang possessing nuclear weapons, Park intends to continue efforts to persuade the North to drop its nuclear ambitions.

Describing Kaesong Industrial Complex a crucial cornerstone for establishing mutual trust between the two Koreas, the president said South Korea would find a new framework for the relations based on common sense and international standards - although it is very difficult to trust the North after it broke its commitments.

Concerning the strained relations with Japan, President Park maintained the same stance as she has recently. “We want to develop a future-oriented relationship, but I regret that some Japanese politicians continue to make verbal blunders related to the past,” Park said. “European integration has been possible thanks to the constructive attitude of Germany towards its past mistakes.” She advised that Japan should look very carefully at the European process.

The Blue House did not release an official statement concerning the president’s comments.

The news came while the president and her delegation were on a flight to Paris on Saturday, the first destination for her eight-day visit to three European countries. She came to the French capital in 1974, immediately after graduating from university in Korea, to continue her studies. However, she had to return to Seoul after her mother, the then first lady, was assassinated by a North Korean sympathizer from Japan who failed in his attempt to assassinate Park Chung Hee.