A defector determined to make the big time

A defector determined to make the big time 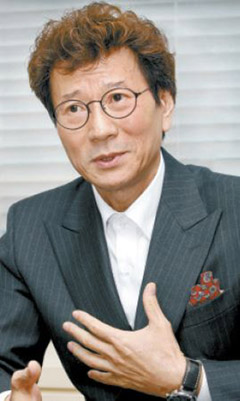 More than 24,000 North Koreans have defected to the South since 1962 and their story line has become familiar: sneaking across a frozen river into China, bravely making their way to a friendly third country, struggling to be accepted by the suspicious, unsympathetic southerners.

Kim Yong is a very different kind of North Korean in the South. He defected to Switzerland in 1991 with a billfold stuffed with cash. Upon arriving in the South, he landed on TV and released a fairly successful hit pop song, “Oh My Pyongyang.” A chain of restaurants followed, and he now has ambitious plans for a retail mall selling luxury goods, not to mention his businesses in such overseas locations as Vietnam and Cambodia.

In short, Kim, 53, is one of the most materially successful North Korean defectors ever. And although he has nice suits and a healthy savings account, he has no intention of slowing down, precisely because of where he comes from; because he is a defector.

“When I was in North Korea,” he tells the Korea JoongAng Daily, “I was educated not to trust anything about capitalism. I want to prove that education wrong through my success.

“I’ve made enough money not to have to work again,” he continues. “But I keep working hard and constantly take new business challenges because I want to prove to the North Korean people that the capitalist world is a world in which any person can live well and that capitalism is a world of opportunity. This is my dream.”

Kim actually comes from a privileged background in the North. His father was a ruling party secretary and his elder brother was a former coach of the North Korea’s national skate team. His nephew got as close to leader Kim Jong-il as just about anyone: He was one of his bodyguards.

Kim, who was raised in Kanggye, Chagang Province, the northern tip of the country, was on the national skating team until the age of 18. He majored in singing at the 2.16 Kanggye School of Arts and became a singer for the Pyongyang National Symphony Orchestra. In 1984, he went back to school to study business administration at the Kim Chaek University of Technology and ended up working for the ruling Workers’ Party.

Eventually, he became manager of the Mount Paekdu Architectural Research Institute’s Bureau 105, a secret organization in charge of earning foreign currency for leader Kim Jong-il. Kim traveled frequently to Communist countries like Poland, Czechoslovakia and Russia. It was the late 1980s and early 1990s.

“I was traveling around Eastern Europe and watching the Communist countries collapse,” he says. “I thought North Korea would go the same route in the coming years. So I decided to defect to the South, although I assumed it would harm my family in the North. I was only 31 at the time, and it was a huge challenge for me.”

Kim prepared his defection for five months. One day, he told his superiors he had business in Moscow. From Moscow, he took a train to Europe, avoiding airports and their security.

He traversed nine European countries to get to Switzerland, a politically neutral country, and declared his intention to exile into the South. Even now, Kim is one of the few North Koreans to defect to the South with an actual passport.

“My journey to the South was not threatening like those of other defectors,” he says.

“I was wearing an Italian luxury suit and Japanese-made shoes. My passport proved my identity as a high-ranking North Korean party official. I bought first-class tickets for the trains. I had money, about 3,000 U.S. dollars and 170,000 Japanese yen [$1,726 at current exchange rates].”

He became an overnight sensation in the South, the first North Korean to sing on television.

Despite the moderate success of his song “Oh My Pyongyang,” Kim knew he would not be successful as a singer in the South.

“I realized I couldn’t make a living as a singer or a comedian. Due to my North Korean accent, I couldn’t become an actor. I didn’t know so many things about South Korea’s culture or its expressions. I knew that producers of TV programs would drop me when I was no longer fresh and novel.”

There was something else Kim brought with him from the North that could appeal to Southerners: North Korean cuisine.

“I learned how to make naengmyeon (Korean-style noodles) when I was a junior skater,” he says. “At the dormitory for the players, there was only one old chef to cook our meal, so I used to help him make noodles and other dishes as I was the youngest player in our team.”

Kim started Morangak, a restaurant offering Pyongyang-style cuisine, and realized there was ample room to grow. With headquarters in Ilsan, Gyeonggi, Morangak grew into a chain with 60 branches and annual sales of 36 billion won ($33 million).

But success came too fast, and Kim couldn’t manage his restaurant empire.

“I closed all the branches and left just the headquarters,” he says. He decided to build a hotel in China. But the hotel business failed, resulting in huge debt. His life in the South started to decline.

Kim decided to get into retail, exporting luxury from Korea to Indochina and bringing luxury into Korea. 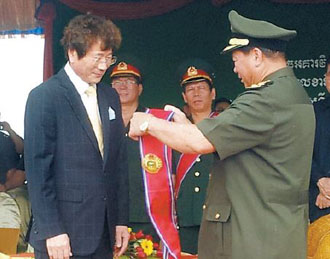 “In Vietnam and Cambodia, wealthy people yearn for Korean products, thanks to Hallyu (the Korean Wave),” Kim said. “They desire Korean products they saw in Korean dramas, such as home appliances, furniture, kitchen supplies, clothes and baby products, even if they are expensive with taxes.”

Kim’s shopping channel in Vietnam is the second largest in terms of sales, and he was honored by former Cambodian Defense Minister Neang Phatat at the Asean Summit in November 2012 for his efforts to boost economic cooperation between the two countries.

“As of October, my noodle products were the most popular item on the country’s six shopping channels this year,” he says. “I sell about 110,000 packages with each broadcast.”

He is building two luxury shopping malls in Cheonan in a joint venture with Oh Young-min, a real estate developer and president of The Mall Korea.

“I obtained the license for ‘The Mall,’ a luxury shopping outlet based in Florence, Italy, and owned by La Quinta Firenze SRL,”, Oh told the Korea JoongAng Daily by phone. “Kim and I invested 6 billion won ($5.6 million) each on the shopping mall in Cheonan.

“On 2,000-pyeong (71,166 square feet) of land, the mall in Cheonan will have about 100 brands, including about 30 Italian brands we rarely see in Korea,” Oh said. “We will also build the same kind of mall in Cambodia, near Phnom Penh.

“I sincerely trust Kim,” Oh says. “Although he came from North Korea with empty pockets, he settled in the South and also succeeded in Vietnam and Cambodia as a businessman.”

Kim says he hopes to become a role model for the defectors already struggling in South Korea and future arrivals.

“Like Chung Ju-yung, former Chairman of Hyundai Group who came from North Korea with only a cow, I want to become a legend as the first defector-turned-business tycoon,” he says. “I also want to prove to my friends and former colleagues in North Korea that I became a legend in the South.”