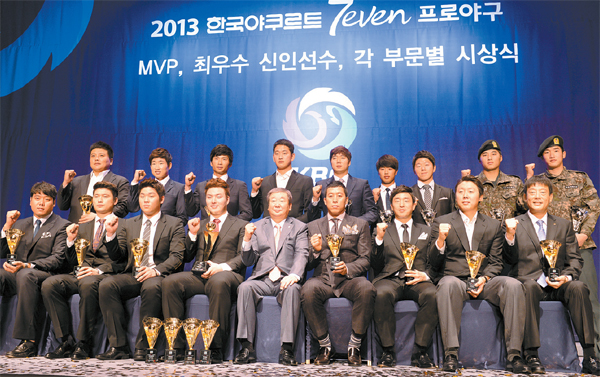 Winners in the pitching and batting categories pose with their trophies yesterday during the 2013 Korea Baseball Organization Awards at the Intercontinental Grand Seoul Hotel in Samseong-dong, southern Seoul. Nexen Heroes’ first baseman Park Byung-ho, fourth from left in the front row, was named as the league’s most valuable player - the second straight year he has won the award. Park also claimed four titles for his hitting, including home runs (37), RBI (117), runs (91) and slugging percentage (.602). Pitcher Lee Jae-hak, 22, of the NC Dinos, second from left in the back row, was named as the rookie of the year. He had a 10-5 record with 1 save and a 2.88 ERA. [NEWSIS]