Wardrobe for musical a ‘Wicked’ lot of work

Wardrobe for musical a ‘Wicked’ lot of work 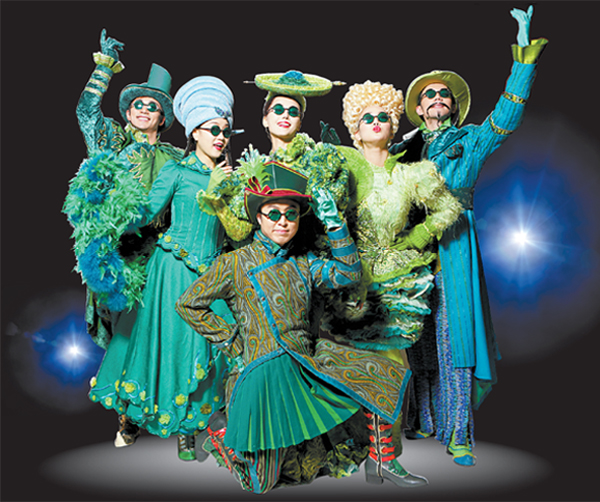 There are numerous factors that make a musical spectacular onstage, such as visual and acoustic effects but, all things considered, it’s the wardrobe that adds glamour to the whole show. The wardrobe for the smash hit Broadway musical “Wicked” includes 350 costumes, 80 wigs and 350 pairs of shoes and costs about $3 million - one of the most expensive among existing musicals. Not only is it the most expensive, it takes about five months to sew and stitch together all the costumes, which takes about “twice as long as other musicals,” according to Billy Roache, associate costume designer for the worldwide production of “Wicked.” Roache says everything from wigs, dresses and shoes is handmade, “hand-stitched, hand-beaded, hand-woven, hand-sewn, hand-everything.”

Last year, the Australian production of “Wicked” came to Korea for the first time and set new records in the Korean musical business. During its four-month show, more than 200,000 people came to watch it in central Seoul, raising 26 billion won ($24.5 million) in revenue.

With hopes that the green spell works again, Seol & Company, a local musical production company, is gearing up to present the Korean production of the blockbuster beginning Nov. 22. Cast members will include Oak Joo-hyun and Park Hye-na in the role of Elphaba, better known as the Wicked Witch of the West. However, in “Wicked,” she is a misunderstood advocate for the animals living under the cruel hand of the ruling Wizard of Oz and his administration. Musical actresses Jeong Seon-ah and Kim Bo-young will take turns playing the role of Glinda, the Good Witch of the North. 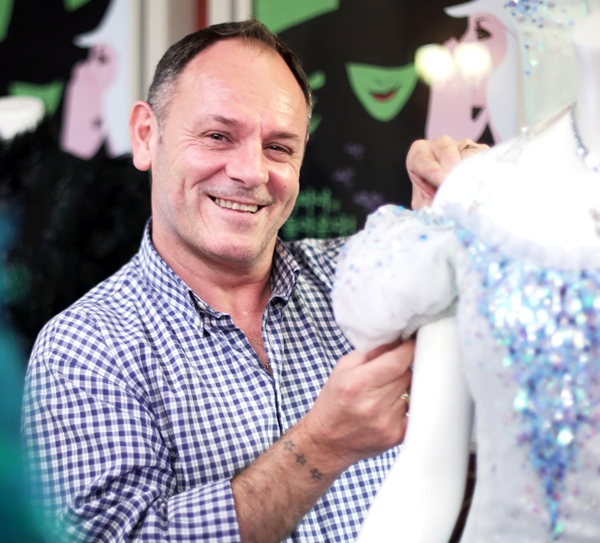 
Despite the high cost and the long haul to complete the wardrobe for the musical, which features “Edwardian-era type clothing,” Korean cast members have their own sets of tailor-made costumes, from wigs to shoes.

Roache said that the costumes needed to be custom-made to fit each cast member so that they not only look good, but feel comfortable, especially when the clothes are “asymmetrical and off-centered.”

“The original designer of the costumes, Susan Hilferty, decided to go with the Edwardian-era type clothing for the costumes but at the same time, she actually thought, ‘How can I make this quirky?’?” said Roache, implying the twisted world of Oz, where animals can talk and a green baby is born. “So the clothes are asymmetrical and off-centered. They are out of proportion as the sleeve is not on a sleeve, and the buttons are not in the center.”

Such intricate designs certainly take a long time to make, not to mention the long hours of hand-sewing the beads onto the costumes to create the “bling” when lights are reflected or even quilting different types of fabrics to create a new fabric. 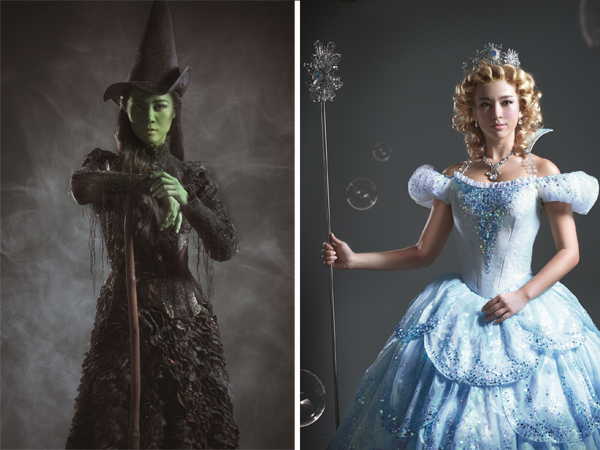 Costumes for the Korean production of “Wicked.” From left, Elphaba’s Act Two dress; the ensemble costume for the Emerald City; and Glinda’s Bubble Dress. Provided by Seol & Company

“Even the embroidery on the costumes are carefully designed and beaded onto the clothes so when the light actually hits it, we get different tonal looks. It creates texture. There are a lot of textures out there that you can’t get these days so you have to create those fabrics yourself,” said Roache.

The tight black dress that Elphaba wears in Act Two is a good example.

The ruffles on the skirt part of the dress have 360 layers of different textures woven together to create the “earthy” look that’s intended by the original designer.

Even for the greenish Emerald City costumes for the ensemble, Roache said at least one to two months are spent on each dress by him and Anna An, the Korean design supervisor, along with 15 more assistants.

Glinda’s wardrobe has the most bling, with a lot of jewels and beads, especially the pearl-blue Bubble Dress, which she wears when she first appears on the stage, descending from inside a large flying bubble machine. It has 36 petals covering the skirt and each petal is filled with thousands of beads that accentuate the bling upon catching the light.

But the most expensive dress, said Roache, would be Madame Morrible’s costume as “hers needs so much intricate beading.” He can’t reveal the exact figure, but each of her costumes is in the range of $25,000 to $35,000. And of course, as the Korean production of “Wicked” adopted a double-cast system for its principal characters, the cost and labor adds up.

Although the double-cast system may have caused Roache and his team to work late nights, Lisa Leguillo, director of the Korean production, said she believes the system creates a great experience for the audience to see “two wonderful casts who are completely opposite of each other but equally as good and equally as interesting” perform on stage. The characters for Elphaba, Glinda, Fiyero and the Wizard are all double-cast, creating as many as 16 different combinations for the audience to enjoy.

“I felt a little anxious at first about the double cast because I’ve never worked with double casts before, except for the double green girls for the Mexico production which recently opened,” said Leguillo, who has been part of the original “Wicked” since its inception. “Oak Joo-hyun is very deep and provocative while Kim Hye-na is more reserved, but in a strong and inviting way. How they approach the audience is also different as Oak makes the audience come to her, while Kim comes to the audience.”