The tax cut would be applied retroactively to purchases since Aug. 28.

However, there are concerns that the deduction could leave a huge hole in tax revenue. As of September, tax collections were 4.6 trillion won ($4.32 billion) short of the same period last year.

Yesterday, members of the ruling Saenuri Party’s Security and Public Administration Committee agreed to implement the government’s plan for those who bought houses since Aug. 28 in a discussion with Security Minister Yoo Jeong-bok. 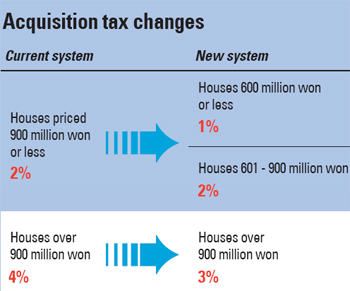 The proposal is a major part of the government’s second policy package to boost the real estate market.

The first package of eased regulations and tax cuts was announced April 1, but most of those measures are still in the National Assembly.

The falling value of houses due to slow sales increased the financial burden of homebuyers who took out large loans when the market was at its peak in the mid-2000s. 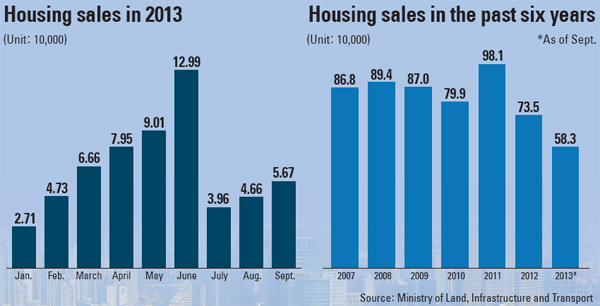 The opposition Democratic Party remained steadfast, announcing yesterday it won’t accept the tax cut unless the government devises a solution that would help make up for the shortfall for local governments.

Local governments depend on the acquisition tax for 26 percent of their tax revenue, according to the Security Ministry.

The tax cut, if applied from Aug. 28, is expected to cost the government about 780 billion won this year.

Investors and potential homebuyers have been postponing transactions since August due to expectations that the tax cut would be enacted.

Analysts expressed relief at the news.

“As the numbers show, there are many investors who decided to wait until the government plan is adopted by lawmakers,” said a research fellow at Real Estate 114, the biggest property market research agency. “The measure also can help convert rising jeonse [two-year contract] demand into sales demand, having a significant effect on both rental and sales markets.”

However, some remain skeptical about the effect of a tax cut.

“Even with the tax cut, it seems hard to revitalize the sales market because the outlook for housing prices isn’t bright,” said a realtor. “I don’t recommend that my customers buy a house.”