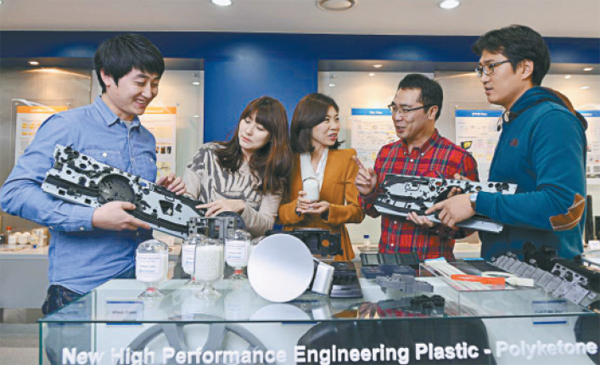 Hyosung employees check out a container filled with polyketone and products made from the polymeric material at Hyosung’s technology lab in Anyang, Gyeonggi. Provided by the company

The company yesterday announced it has applied for and registered 133 Korean domestic patents and 27 overseas patents on a polyketone that is three times better than traditional catalysts.

Furthermore, Hyosung said it has secured the engineering data required for commercial scale production of 1,000 tons annually from its polymerization plant established last year in Ulsan. Commercial development of polyketone is a “remarkable achievement and reflects the depth of Hyosung’s R&D and production knowledge in the field of chemistry acquired over the past 50 years,” said Woo Sang-sun, president of Hyosung R&D Center.

According to the company, more than 1 trillion won worth of added value is expected to directly flow from polyketone alone, primarily as a replacement for other materials, and the overall economic impact is expected to be as much as 10 trillion won by 2020.

Hyosung said its goal is to achieve a share of 30 percent in the world’s engineering plastic material market worth 60 trillion won, which has been marking 5 percent annual growth.

Polyketone can be used as a high-value structural and finishing material for automobile and electronics because of its improved impact, chemical and wear resistance. In addition, it can also be utilized in tire cord, industrial rope or belts. “With its excellent properties, polyketone has been a key target for commercialization by leading chemical companies in the United States and Japan since the 1980s as they focused on its development but, despite their best efforts, none was able to commercialize it,” said Kim Byeong-cheol, a composite materials professor at Hanyang University. “Hyosung’s success in developing polyketone as a new commercial polymeric material paves the way for Korea to take an advantageous position in global markets.”

Hyosung plans to invest 200 billion won in establishing a polyketone plant with an annual production capacity of 50,000 tons by 2015, which is in addition to the polyketone polymerization and production plant in Yongyeon, Ulsan, that opened in March 2012.

The size of the world’s engineering plastic market, in which polyketone was 8.51 million tons in 2012, is expected to grow by more than 5 percent a year to 9.77 million tons by 2015, according to the company.

Hyosung said its success with the world’s first commercialization of polyketone resin follows its development of high-performance engineering composites and super industrial fiber with ultra-high strength and elastic modulus, giving it the momentum to expand and further dominate the global market, worth 66 trillion won annually

Since polyketone is a new material for commercial-scale deployment and is being rolled out for the first time in Korea, it is expected to make a contribution to improving the industrial competitiveness of the country through strategic cooperation with the many different companies that will use it.

According to data from World Premium Material’s planning committee, supported by the Ministry of Trade, Industry and Energy, polyketone delivers a tremendous ripple effect worth more than 10 trillion won to the industries involved. It is also expected that about 8,700 jobs will be created across related industries by 2020.