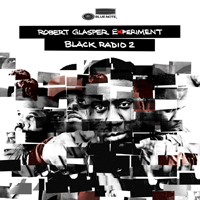 After winning the best R&B album Grammy this year for “Black Radio,” the Robert Glasper Experiment returns with a new release that could easily put them in the running for another.

The Experiment - which consists of pianist and producer Robert Glasper, bassist Derrick Hodge, drummer Mark Colenburg and saxophonist Casey Benjamin - continues their revival of jazz and neo soul on “Black Radio 2,” which takes the band’s rebellion against genre integration one step further.

The album kicks off with “Baby Tonight (Black Radio 2 Theme)/Mic Check 2,” a soothing piano intro with short snippets of his featured guests prepping you for what’s to come. Here, Glasper is a beast on the keys.

Glasper’s array of famous friends on the album include Brandy on the laidback, yet addictive “What Are We Doing,” and Jill Scott, sounding like butter, on the smooth lead single, “Calls.” “Black Radio 2” works because Glasper has comfortably picked the right artists to collaborate with. There’s nothing to dislike here. AP