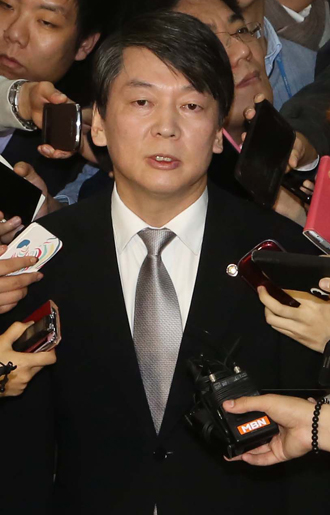 Ahn, speaking at a press conference yesterday, said a special prosecutor should be appointed to look into expanding allegations that the National Intelligence Service and the military’s Cyber Warfare Command - as well as the Ministry of Patriots and Veterans Affairs and the Ministry of Security and Public Administration - colluded in support of Park Geun-hye, the ruling party’s presidential candidate at the time.

“Let the independent counsel handle what happened during the presidential election,” he said, “and we, the politicians, will focus on national agendas and the improvement of people’s lives.”

The ruling Saenuri Party was quick to criticize, dismissing Ahn’s move as an attention-seeking measure.

“Ahn probably felt the desperate need to remind the public of his presence,” said Representative Kim Tae-heum, Saenuri Party spokesman. “But he must refrain from making remarks that will fuel distrust in the judiciary and create a social rift.”

Kim added that the prosecution is currently holding an investigation and that trials are ongoing for some of the allegations.

“Ahn should have made the proposal after the trials are over,” Kim said. “His actions are irresponsible. Ahn always acts this way whenever his presence is weakened.”

The opposition Democratic Party - watchful of Ahn’s attempt to expand his control over the liberal arena - responded with lukewarm sentiments toward his proposal.

Although the DP said it agrees with Ahn’s assessment on the magnitude of the issue, an independent counsel probe should be established only after the trials and ongoing investigations by the prosecution end.

Asked about growing speculations that he plans to create a new political party, Ahn said yesterday that he will address the issue at another time.

However, a source from Policy Network Tomorrow, Ahn’s think tank, told the JoongAng Ilbo on Sunday that a preparatory team will launch before the end of this month to work toward the establishment of a new party.

Ahn has apparently already begun recruiting candidates for next year’s local elections, appointing them as policy executors at his think tank. He planned to recruit 1,500 candidates for the local elections before launching his new party. The move is presumably fueled by the Democratic Party’s latest defeats in the by-elections.

“We are carefully creating our visions and policies in order to avoid repeating mistakes of the failed political parties,” Representative Song Ho-chang, an independent lawmaker and Ahn’s close associate, said on Friday.

At the press conference yesterday, Ahn dismissed a Democratic Party lawmaker’s claims on a behind-the-scene negotiation between Ahn and Moon Jae-in - formerly the presidential candidate for the DP-? to consolidate their candidacies during the presidential election. Ahn eventually bowed out of the race and showed halfhearted support for Moon; the Saenuri Party’s Park went on to win the race.

While the two sides remained tight-lipped about the negotiations, Representative Hong Young-pyo of the Democratic Party claimed in his recently published memoir that Ahn had asked Moon to call him the “future president” and demanded the right to establish a new political party.

“It is inappropriate to talk about [this subject] at this press conference,” Ahn said. “The claim doesn’t deserve my response.”

The Saenuri Party, meanwhile, has criticized both liberal factions for the conflict.

“People find their nonsense about the ‘future president’ humorous,” said Representative Hong Moon-jong, secretary-general of the ruling party. “New politics and ‘future presidents’ are a luxury to those who are participating in political mudslinging. Their best choice is to lay low and stay quiet.”