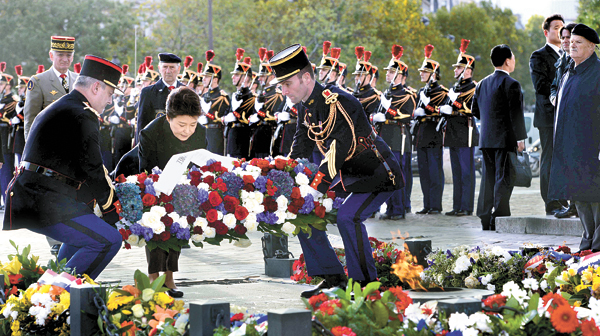 President Park Geun-hye offers flowers at the Tomb of the Unknown Soldier in the square of the Arc de Triomphe in Paris yesterday. Park and French President Francois Hollande had a bilateral summit meeting in the Elysee Palace to boost trade and investment between Korea and France. By Choi Seung-shik

The summit confirmed Korea’s ties with France as partners in trade, creative areas of their economies and cultural realms.

Park and Hollande issued a joint statement to agree by the end of next year on simplifying visa procedures for businessmen and corporate interns. The visa application procedure will be shortened from three months to less than a month.

They also agreed to step up exchanges of young corporate interns.

A flurry of business deals involving the Korean government, companies and their French counterparts were signed at a meeting between the Federation of Korean Industries (FKI) and French Business Confederation (Medef), which took place before the summit.

“Korea’s smartphones and other cutting-edge technological products being loved across the globe, and Hallyu products such as K-pop and dramas, are good examples showing the potential of a creative economy,” said Park in a keynote speech - which she delivered in French. “France has been spearheading innovation and creating new products with individuals’ creativity and imagination .?.?. If the two countries’ efforts toward creative economies are combined we could build a future economic framework through creative convergence of different ideas, culture and technologies.”

Park said future cooperation between the two countries will be supported by three pillars: new industries, culture and start-ups and smaller companies. Future industries will include alternative energy sources to replace petroleum. New energy is one of 34 industries designated by the French government for future growth in September.

Park mentioned the French auto giant Renault’s electric vehicle adopting a battery produced by Korea’s LG Chem as a good example of collaboration. She visited Centre Renault Zero Emission, an electric-vehicle showroom on the outskirts of Paris, in the afternoon.

Renault, France’s No. 1 electric-vehicle manufacturer, and LG Chem, which controls a 35 percent share of the global market for batteries for mid- and large-sized vehicles, agreed in the presence of the president to step up collaboration in eco-friendly vehicle manufacturing.

The two also vowed to sign a joint innovation contract in the near future to develop a next-generation electric vehicle that can travel longer distances.

The business leaders of Korea and France also agreed to strengthen cooperation in the health and pharmaceutical industries. Korea’s Ministry of Health and Welfare reaffirmed a plan to sign a memorandum of understanding (MOU) by the end of this year with France’s Sanofi-Aventis to expand investment in joint clinical experiments. That is a follow-up measure to a contract signed in June 2009, when the French pharmaceutical giant promised to invest 70 billion won ($66 million) in Korea and help build an R&D infrastructure.

To support Korea’s medium- and small-sized companies, the Korean government agreed with its French counterpart to jointly work on R&D projects. Each side will invest $1 billion.

Four business-related MOUs were made in financial and oil development. Korea Eximbank signed an MOU with Proparco, a French financial public company, to jointly advance into emerging markets such as Africa and Asia with a focus on power generation, renewable energy, railroads and water processing. Those markets have been experiencing difficulty raising finance despite their high growth potential.

The state-run Korean bank also signed an MOU with Total, a French multinational oil and gas company and one of top five brands in the world. Total, together with Novatek, Russia’s second-biggest natural-gas producer, and China National Petroleum Corp., have established Yamal LNG to proceed with a project to exploit and bring to markets the vast natural gas reserves in the Yamal Peninsula in northwest Siberia.