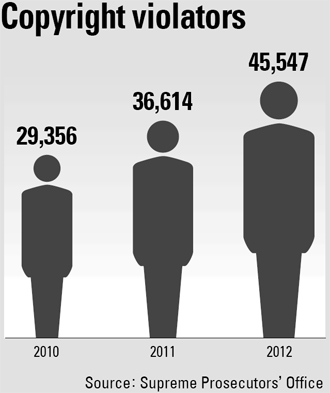 In October 2010, a 46-year-old Internet user surnamed Shin uploaded the film “Grand Prix,” starring Kim Tae-hee and Yang Dong-gun, on a file-sharing site just a month after it debuted in theaters.

Sidus FNH, the movie production company, had agreed with the site manager to split the profits generated from putting its movies online from 70 percent to 30 percent. The two parties agreed that for each newly released movie downloaded, users would pay 3,000 won ($2.80).

But in blatant disregard for the agreement between Sidus FNH and the Internet site, Shin uploaded “Grand Prix” for just a 300 won download fee to entice users to buy his uploads over regularly priced options.

The more people who chose to download his cheaper uploads, the more “cyber money” Shin could earn, enabling him to download more content for personal use.

Shin, however, wasn’t alone. According to the Supreme Prosecutors’ Office, the number of people prosecuted on charges of copyright violation jumped to 45,000 last year, a significant increase from 29,000 in 2010.

In the first five months of 2013, the Korea Copyright Commission reported 23.8 million cases of copyright infringement from the illegal distribution of material across 10 major file-sharing Web sites. That alone has resulted in more than 86 billion won in losses for the entertainment industry.

Sidus FNH - which noticed a number of its movies being downloaded for just a couple of hundred won - eventually filed a damages suit against 78 so-called movie uploaders, including Shin, claiming they infringed on the copyright of its products.

The company claimed that users illegally uploaded a total of 230,000 of its movies in 2011.

The Seoul Central District Court on Sunday sided with the movie production company, ordering Shin and the other defendants to pay a collective fine of 78 million won.

“Uploading movie files on Internet sites at such a discounted price without the approval of the plaintiff to make them available for an unspecified number of site users is an act that infringes the plaintiff’s rights of reproduction and transmission,” said the court in its ruling.

The court further said that Shin will bear most of the responsibility of the damages, ordering him to pay 2.1 million won for losses incurred by the movie production company.

“A majority of the people who violated copyright are illegal file uploaders,” said one member of the prosecution.

The rest of the defendants were ordered to pay between 150,000 won and 21 million won.