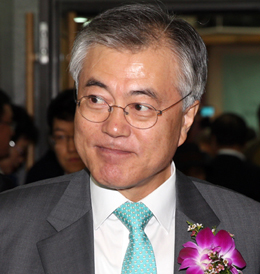 The prosecution said yesterday it has summoned Representative Moon Jae-in of the Democratic Party, who served as President Roh Moo-hyun’s chief of staff, to question him about the mysterious absence of an inter-Korean summit transcript from the National Archives.

Moon said he will cooperate with the probe, while the largest opposition party criticized the prosecution for summoning its candidate from last December’s presidential campaign at a politically sensitive time.

The ruling Saenuri Party and the DP are at loggerheads over allegations that government agencies participated in a smear campaign against Moon during the election campaign. The issue has led to a paralysis at the National Assembly.

The Seoul Central District Prosecutors’ Office said yesterday it informed Moon on Saturday that he should appear for questioning in its investigation into allegations that a transcript from the 2007 summit between Roh and North Korean leader Kim Jong-il in Pyongyang was deleted from the Blue House computer system before it was transmitted to the National Archives at the end of Roh’s term.

Prosecutors appeared to be at the final stage of their investigation into the transcript.

The controversy started a year ago when a ruling Saenuri Party lawmaker claimed that the late South Korean president had disavowed the western maritime border, the Northern Limit Line, during his 2007 meeting with Kim. At Moon’s suggestion, a bipartisan group of lawmakers searched the National Archives earlier this year to find the original transcript to see if that claim was true, only to discover that it was missing.

The case was handed to the prosecution in July, and the prosecutors said last month that their search at the archives also found no transcript. They concluded it was never stored there.

The prosecutors already questioned key members of the Roh Blue House except for Moon. Moon served as Roh’s chief of staff from March 2007 to February 2008 and oversaw both the preparations for the inter-Korean summit and the transfer of presidential records to the archives.

Moon said he will cooperate with the investigation. He already issued a statement on Oct. 10 criticizing the prosecution’s handling of the probe.

“Instead of harassing innocent working-level officials, the prosecution must summon me,” Moon said at the time.

Last month, the prosecution concluded that the transcript was stored and then later deleted from the Roh Blue House’s computerized administrative system, which was called e-jiwon. But a private copy of the e-jiwon that Roh made and took to his home in Bongha Village after his presidency appeared to have the missing transcript, the prosecutor said. After finding trances of the missing record, digital forensic experts of the prosecution managed to restore it.

The big question is why the transcript was deleted from the original system and who ordered the deletion.

After Moon said he will submit to the questioning, the Democratic Party yesterday criticized the prosecution’s timing.

“The prosecution asked Moon to appear as a witness as soon as the legislature ended its audit on the government,” said Representative Jun Byung-hun, floor leader of the Democratic Party. “The timing is too political.”

Jun said it was inappropriate for the prosecution to call a former presidential candidate of the largest opposition party as a witness. “Are they trying to make 48 percent of the people who voted for Moon in the presidential election their enemies in a kind of politics of hatred?”