Another record month for reserves

Another record month for reserves 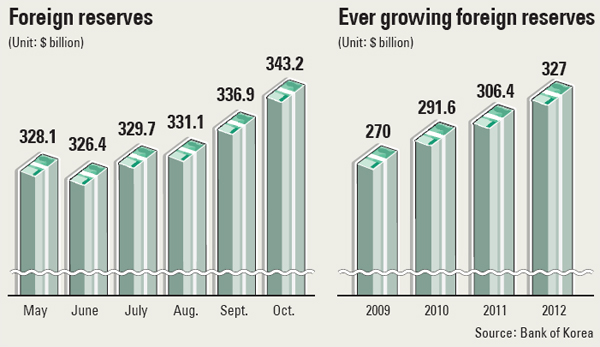 Korea’s foreign reserves reached a record high for the fourth straight month in October, largely on the back of improved profits on foreign currency denominated assets as well as the strengthening value of non-dollar currencies, particularly the euro.

According to the Bank of Korea (BOK) yesterday, foreign reserves were $323.2 billion at the end of October, an increase of 1.8 percent, or $6.3 billion, compared to September.

It was the largest dollar increase since $7.6 billion in October 2011.

The central bank cited postponement of the tapering of the U.S. Federal Reserve’s bond-buying program as the main contributor.

“While the management profit on foreign-exchange assets improved last month, foreign reserves were able to expand largely thanks to the appreciation of non-U.S. currencies such as the euro,” said a BOK official.

The euro last month saw its value appreciate 1.7 percent against the greenback. The British pound during the same period weakened 0.8 percent, while the Japanese yen depreciated 0.6 percent.

He added that Korea isn’t the only nation where foreign reserves expanded.

“Other than Hong Kong, the top 10 countries by foreign-reserve size have seen their holdings expand as large amounts of foreign capital funneled into emerging markets due to the delay in tapering” of the U.S. stimulus program, he said.

As of the end of September, Korea ranks world’s seventh in foreign-reserve size. China remains No. 1 with $3,662.7 billion, while Japan ranks second with $1,273.4 billion.

The nation’s foreign-exchange holdings exceeded $300 billion for the first time in April 2011 and have been growing ever since.

However, October’s record level comes at a time when the Korean government is suspected of intervening in the currency market as the appreciating won threatened exporters’ profitability.

Although exports last month marked were an unprecedented $50 million, the Korean won, which is currently dwindling near the 1,060 level, has become a major concern. Many exporters - particularly small and midsize ones - consider 1,050 won a break-even point.

The U.S. Treasury Department late last month raised concerns about the currency policies of Korea, China and Japan, adding it will urge the Korean government to limit its intervention.

Additionally, the increase in foreign reserves is believed to be a buildup to mitigate the impact once the Fed scales back its stimulus.

In last month’s meeting, the Fed decided to continue its quantitative easing. However, some experts speculate tapering could begin as soon as next month.

Among foreign reserves last month, securities accounted for 90.5 percent, or $310.8 billion, followed by $21.7 billion deposits and $4.8 billion for gold.