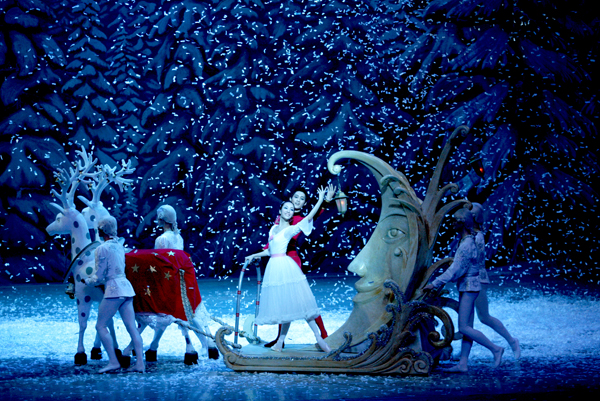 Christmas is coming and so is Tchaikovsky’s “The Nutcracker,” presented by the Universal Ballet for families to enjoy. See THEATER, below. Provided by the organizer

Hancock has long been considered a jazz legend and was essential in crafting the “post-bop” sound with Miles Davis. Hancock released his 47th studio album “River: The Joni Letters” in 2007, a tribute album to singer-songwriter Joni Mitchell.

Friday: As part of her Asian tour, “Beyond Expectations,” the 65-year-old violin virtuoso Chung Kyung-wha will be stopping in Seoul to play various sonatas, including Beethoven’s Sonata No. 5 in F major, Grieg’s Sonata No. 3 in C minor and Faure’s Sonata No. 1 in A major.

She will be joined on stage by American pianist Kevin Kenner.

Saturday: The American Christian vocal quartet Avalon was nominated for a Grammy award for the Best Pop and Contemporary Gospel Album in 2000, 2001 and 2004.

Nov. 13: Although it is French cellist Jean-Guihen Queyras’s third visit to Korea, this show will be his first solo concert here. Queyras’s repertoire is quite broad, but he is known to prefer playing works that are more modern.

Since releasing its first album in 2004, Dynamic Duo has consistently been one of the highest-profile hip-hop groups on the peninsula; one of the rare ones to get noticed over the domination of K-pop. When the group released their seventh album in July, called “Lucky Numbers,” all 13 songs from the record shot high up in the local music charts.

Dec. 6: Kenny G, one of the world’s most famous saxophone players, comes to Korea once more.

Ever since his 1992 album “Breathless” sold 15 million copies, Kenny G has been a global icon in smooth jazz and adult contemporary music. This time, he will be performing with both his band and the Korean Symphony Orchestra, their second team up since 2012.

To Nov. 17: The famous French musical is being staged in Korean with a stellar cast, including diva Bada. Produced by the original creative team of composer Riccardo Cocciante and choreographer Martino Muller, the musical tells the story of the hunchback who lives in Paris’s most famous cathedral, Quasimodo, and the woman he loves, the gypsy Esmeralda.

Nov. 24 to Dec. 22: The West End’s popular musical “Ghost” is presented in Korea for the first time.

Adapted from the Hollywood movie of the same name, “Ghost” tells the undying love story of Molly and Sam.

“The Nutcracker” is a staple of ballet, along with “The Sleeping Beauty” and “Swan Lake,” thanks to the great combination of Tchaikovsky and ballet choreographer Marius Petipa.

Nov. 30: The dance-theater hybrid “Sensation,” created in Amsterdam, the Netherlands, in 2000, returns to Korea with the theme “Wicked Wonderland.”