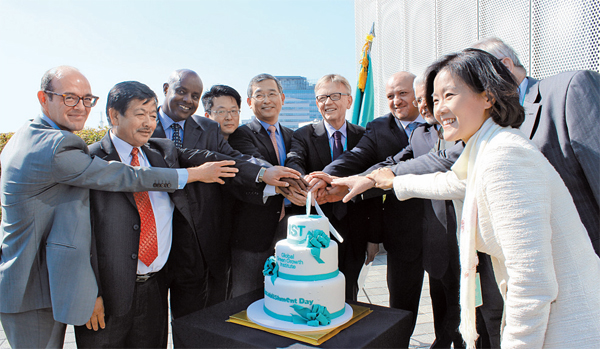 The Global Green Growth Institute (GGGI) celebrated its first anniversary at its headquarters in Jeong-dong, central Seoul, since becoming an international organization on Oct. 18, 2012. The event was attended by environmental experts, government officials and diplomats.

“The GGGI is the world’s first and only international organization dedicated to green growth,” said Howard Bamsey, director-general of the institute, “and its uniqueness helped the organization to be granted official development assistance [ODA] eligibility status.”

He added that within a short period of time, “the GGGI has become a truly international organization with membership from 20 countries.”

Bamsey also told the Korea JoongAng Daily that the GGGI is looking forward to opening a new office in Songdo, Incheon, in early December that will also be home to the secretariat of the Green Climate Fund.

The GGGI also used the event to launch the book “Post-2020 Climate Change Regime Formation,” by Chung Suh-Yong, a professor of environmental studies and policy at Korea University.

Chung said he wanted to examine how to provide not only a theoretical but practical background to how the GGGI can best fit into the global climate change regime as a leader in a country-driven process.

“I know the GGGI is a purely bottom-up organization,” he said, adding that the most important issues to tackle include “technology transfer, finance and capacity building - these are the main components of green growth planning and implementation.”

The GGGI also announced the launch of the New Climate Economy Initiative, an international agenda focused on the economics of climate change, which is supported by Colombia, Ethiopia, Indonesia, Norway Sweden and the United Kingdom. The initiative aims to tackle how governments can achieve economic growth while achieving emission reductions.

“As of mid-2013, the GGGI has been developing, scoping, setting up or implementing more than 20 green growth-related projects in developing countries and emerging economies across the world,” said Mattia Romani, deputy director-general of GGGI. “On our work on the ground, we are seeing how countries increasingly recognize the potential of green growth to deliver wealthier, safer, more inclusive economies for their populations.”

GGGI was founded in June 2010 under the Lee Myung-bak administration’s green growth initiative to cooperate in environmentally-friendly development.