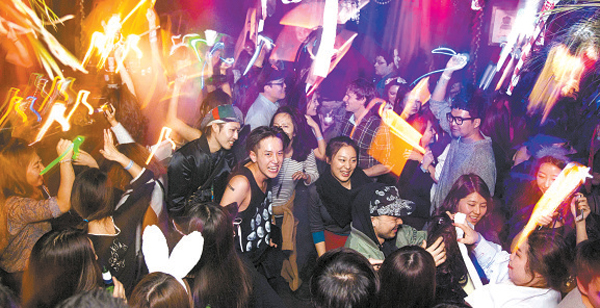 Halloween is not an event traditionally associated with Korea, yet its popularity in the country seems to increase every year, especially in Itaewon, central Seoul.

With the rapid gentrification of the foreigner-centric area over the past few years, and the rising popularity of international club culture in Seoul, venues are adopting Halloween to attract a growing number of Koreans who want to let off steam by dressing up in costumes for the evening.

Anyone taking a trip down Itaewon Street on Oct. 26, the Saturday before Halloween, would have been greeted with packed crowds of both foreigners and Koreans wearing outfits that ranged from Wonder Woman and Elvis to vampires and witches.

At Globe Lounge, however, a “boutique bar and lounge” on the second floor of a building behind the Hamilton Hotel, it seemed like the zombie apocalypse had begun.

Josh Kimm, CEO of Globe Lounge, told the Korea JoongAng Daily that he wanted to show how “a piece of wonderful, carefree American culture is being fast absorbed and enjoyed here in Seoul” during Halloween and at his club.

He has transformed Globe Lounge into a Zombie Madness Fiesta the weekend before Halloween for the last three years to introduce modern Halloween culture to Seoul.

DJs such as Eastmask, a regular in the underground Seoul music scene, supplied a mix of party tunes, the bartenders whipped up custom Halloween cocktails featuring popping candy and radioactive colors, with names like Zombie Brain and Globe Undead, and the venue went under a Halloween renovation just for the weekend.

“We chose the zombie concept because zombies are so hot right now in popular culture with the ‘Walking Dead’ series and so on,” said Sally Bae, a graduate of set design at Syracuse University, New York, who was in charge of decor for the event.

Bae explained how she wanted to adapt the zombie theme to the upmarket, boutique feel of the lounge by creating a retro, spooky feeling with dated, black-and-white pictures in ornate photo frames, red lighting and body parts hanging from the ceiling.

The club was not the only thing Kimm arranged to have decorated. While people were encouraged to dress up before arriving at the club, makeup artists from a luxury Gangnam salon had been invited to transform lazier Halloween partygoers into zombified versions of themselves, resulting in a sea of the undead dancing to electro and dance music from 10 p.m. to 5 a.m.

Not that everyone chose to dress up. One event attendee in normal clothing, 26-year-old office worker Lee Sun-young, said, “I like watching others in their outfits, but I don’t want [to do] it. It’s not beautiful.”