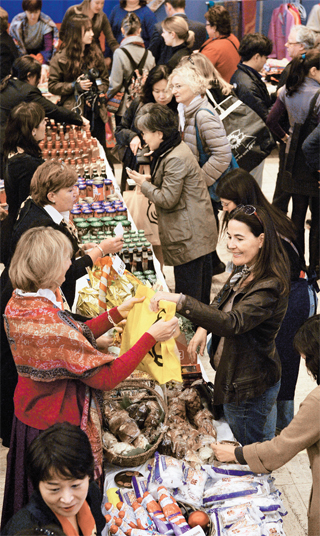 Visitors browse through a variety of items offered by the German Embassy at the 35th annual SIWA traditional bazaar, which was held yesterday at the Seoul Museum of History in central Seoul. By Park Sang-moon


The Seoul International Women’s Association (SIWA), Seoul’s largest international women’s organization, hosted its traditional bazaar at the Seoul Museum of History, in central Seoul to raise funds for those in need.

A wide selection of traditional handicrafts and specialty items from various countries - including India, Bangladesh, Sri Lanka and Kenya - were on display yesterday at the 35th annual SIWA and Diplomatic Community Bazaar.

“Traditionally, we had some 40 embassies participate in the event, but this year, 34 embassies joined. But all of them were willing to play their part in helping those in need by selling their countries’ unique products,” said Michelle Morrison, a public relations representative for SIWA.

Members of SIWA - many of them spouses of embassy officials - sold products representative of their home countries.

Among those participating was the Nordic Club, a stand jointly run by Norway, Denmark and Sweden.

“This candle is made of stearin [glyceryl tristearate],” said Anne Karine Garstad, a member of SIWA and the Nordic Club, “which means that it won’t drip, but burns for seven hours.”

She also promoted the sitting mats.

“[In Norway], reindeer skin is used for sleeping mats, shoes and tents,” she said. “You can use this to keep yourself warm when you do outdoor activities such as mountain climbing.”

Near the Nordic Club was Brazil’s stall, which displayed handmade crafts featuring birds.

“In Brazil, there are a lot of exotic birds surrounded by the natural environment,” said Maria Ligaya Fujita, a member of SIWA and the wife of Brazilian Ambassador Edmundo Sussumu Fujita.

“This decoration is made of a semiprecious stone,” she added, holding up one of her wares.

Many of the traditional textiles of Central Asian countries appealed to visitors as well.

“Patchwork quilts and finely-embroidered hats are particularly popular,” said Zhanna Baigaziyeva, spouse of Kazakhstan’s ambassador. “I believe this is because people here can’t usually get these kinds of products at home. I’m happy to support those in need by selling products unique in my native country.”

“This syrup is made in Quebec in Canada and has a healthy and natural taste,” said Lindsey Gorfine, a volunteer at the stall.

“We also have Canadian wine. Canada is an up-and-coming country in the wine industry, and this wine is a bit sweet but not heavy,” she added.

In addition to shopping, attendees sampled exotic dishes sold at the International Food Court made by the group’s members. The bazaar’s highlights also included a free wine tasting and free beauty care.

The SIWA president expressed her gratitude toward the Seoul Museum of History, which has regularly provided the venue for the charity effort.

“Thanks to the generosity of the museum and the assistance of the Seoul Metropolitan Government, we [were] able to have the bazaar at such a conveniently located venue, easy for everyone to attend,” said SIWA President Terri Hartman.

More than 5,000 locals and international visitors attended the bazaar last year, which is similar to the number of visitors that attended this year, according to estimates provided by SIWA.

Initiated in 1970, the SIWA Bazaar has raised more than 2 billion won ($1.9 million) to provide support to those from underprivileged backgrounds. SIWA estimated that they raised about 100 million won ($91,659) in proceeds from this year’s bazaar.

In an effort to effectively distribute proceeds from the bazaar to those in serious need, the association’s Welfare Committee members visit local charities and facilities to assess what and how much they need. Then they provide requested goods and services to those communities.