No one really considers the significance of hanbok, or traditional Korean garments, because they are worn once or twice in a lifetime. After they’re worn on a person’s first birthday or wedding, they end up being put back in the closet.

But the Ministry of Culture, Sports and Tourism wants to reinvent the traditional clothes so that they won’t be considered obsolete.

On Oct. 14, which is designated Hanbok Day, the Culture Ministry held a press conference at a restaurant in central Seoul to announce a comprehensive plan to promote hanbok.

The plan includes launching a promotion center dedicated to hanbok so that the state-run organization would nurture hanbok experts, develop hanbok-related products and conduct in-depth research on the clothes.

A hanbok fashion show that took place on Oct. 17 at Culture Station Seoul 284, central Seoul, was the first step.

“There have been many hanbok fashion shows, but most of them were one-time only events,” said Han Min-ho, team head at the regional and national culture division of the Culture Ministry. “We hope to conduct this hanbok fashion show on a regular basis under the same director so that we could expect achievements in a few years.”

The hanbok fashion show, titled “2013 Fall/Winter Hanbok Design Trend Suggestion,” was co-hosted by the Korea Craft and Design Foundation and an association of nationwide hanbok makers.

It was a government-initiated fashion show, but the creations by middle-grade hanbok designers provided some insight into the future of hanbok.

Before the fashion show, a short video clip was shown to the audience. The clip, produced by media artist Lee Lee-nam, was emblematic of the show because it projected images of the past and present. An old landscape painting was overlapped with an image of a soaring rocket, and the fashion show began.

Six hanbok designers each came up with eight creations. Their modern interpretations of hanbok were different, but they also had something in common.

All of their creations were based on the curves and shapes of hanbok, but they also went well with modern clothes and accessories. Most of them were made with easy-to-wash and easy-to-care fabrics, instead of silk.

It seemed like all the hanbok designers started working on their creations by asking themselves the same basic question: Why does hanbok for women consist of jeogori, or an upper garment, and a long skirt? To answer this question, designers came up with unique and various combinations of hanbok instead of a short jeogori and a long skirt. 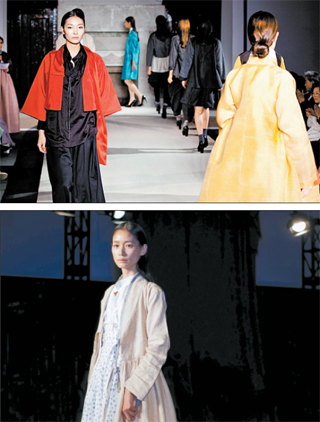 The combination of jeogori and pants might look odd, but the pants came from dansokgot, or underwear pants, which are traditionally worn inside of a hanbok skirt. The jeogori jacket is also a varied version of hanbok that was excavated from the tombs of upper-class women during the Joseon Dynasty (1392-1910).

Except for the mass-produced, ready-made ones, hanbok is usually made with silk, and that is where the hanbok designers stepped in. They varied fabrics by using organic cotton, linen and a jersey-knit fabric.

“I wanted to add mobility by making hanbok pants with jersey-knit fabrics so that B-boys are even able to wear them,” said Gang.

Lee of Woehee also made durumagi using velvet and jeogori with denim fabrics.


Toning down from primary colors

The first image that comes to mind when thinking of hanbok is probably the complementary color contrast. For example, a set of hanbok for a newlywed bride is a combination of a deep-green jeogori and a red hanbok skirt. The frequent use of gold and silver foils is another characteristic of traditional hanbok, but primary colors and flamboyant foils were hard to find at the fashion show.

Instead of popping colors and decorations, gray, white, beige and pastel colors dominated the runways.


Hanbok with a pair of leggings

Basic hanbok are always worn as a set, but designers suggested a new way of wearing them: matching them with modern clothes.

Of the many creations, Gang’s tunic-style dress, which looks like jeogori, was layered with leggings and a basic T-shirt.

Cho Young-gi of Cheonuimubong, which roughly means “perfect beauty with no traces of artifice,” also developed durumagi into a minimal cocoon-style dress.

As changes were added to the shape and design of hanbok, they went well with a diverse set of shoes - from oxfords with platform heels to wedge boots to sneakers.

Of all the designers, Lee probably made the best use of accessories. She added accessory chains to the waist of hanbok pants and matched diverse accessories such as snapback caps, headphones and iPads with her modern hanbok.

Six of the designers in the fashion show are in their 40s and 50s and are building their careers as hanbok designers. They are neither novices nor veterans. Thus, some of them were hesitant when they were invited to the hanbok fashion show.

“I accepted the offer, but I had a lot of concerns,” said Gang, who’s been making hanbok for the past 28 years. “I fully understood the purpose of the fashion show, which aims to raise awareness of hanbok by showing modernized versions of the clothes, but I was also worried about my image.

“I’ve been making traditional hanbok for a long period of time, but if I made hanbok that can be worn with a pair of jeans, I thought my image [as a hanbok designer] would go bad.”

After the show, however, all the designers said in unison that they see a ray of hope.

“We can’t actually work at the office wearing hanbok. So it is right to find a solution [to promote hanbok in modern ways],” added Gang.

Cho agreed: “Today’s hanbok has also changed a lot over the past years.”

Among the six designers, Lee originally turned down the offer because she had fixed images of a hanbok fashion show. But she changed her mind about a month before the fashion show. She stayed up many nights preparing but said, “It was really hard to prepare this whole thing, but I found myself thinking of the next fashion show even before I finished [this one].

“I was thrilled and happy because of the fact that I was dreaming as I made hanbok.”