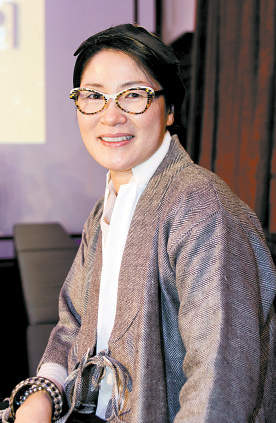 Stylist Seo Young-hee doesn’t make hanbok, but she is one of the few individuals in the fashion industry who brings up images of avant-garde hanbok because of her magazine photo shoots featuring modern clothes and hanbok.

Thus, it didn’t come as a surprise when she was designated as the director of the hanbok fashion show.

Q. How did you end up directing the hanbok fashion show?

A. I was hesitant when I received the offer in the first place because I’m personally against such shows. But I realized the Ministry of Culture, Sports and Tourism would launch a promotion center that is dedicated to hanbok. This news made me change my mind. I also thought to myself that the fashion show would become a platform for hanbok designers where they can exert their imagination. Think about it! They are designers, and no one really wants to make hanbok only for newlyweds for their entire career.

What was your priority when preparing for the fashion show?

The most important thing was creativity. I tried to select creative designers when I interviewed them. I can tell who is creative by instinct. After I selected them, I asked them to be themselves and make hanbok as they wished.

All the hanbok that were staged during the show were quite shocking.

I think there should be a middle ground between hanbok that is put on display at a museum and mass-produced, ready-made and modernized hanbok that is available on the streets of Insa-dong. Some designers were concerned about negative comments from other hanbok designers [who stick to tradition because of unconventional designs], but I told them not to think about it.

Hanbok is clothing from the past. That’s why it clashes with trends rather than being trendy. What do you think?

My definition of trend is making something that is far better and newer than expected. And there is surely a trend in hanbok. For example, the most trendy hanbok for children these days is hanbok made with small floral print fabrics manufactured by Liberty London. It is quite costly because a single set of hanbok costs more than 300,000 won [$260], but mothers buy it. It proves hanbok could lead a trend.

You are well known for mixing and matching hanbok with modern clothes.

I wanted to differentiate my creations [for Vogue Korea] from others, so I began featuring hanbok with modern clothes. I dyed a model’s hair red and let her wear hanbok and modern clothes together. I did that for the first time [in 2006] and received rave reviews. Ever since then, it has become my yearly routine. I plan such photo shoots whenever national holidays are nearing.

Although the fashion show has ended, do you think it will change the way people think of hanbok?

We are living in a society where people don’t even dare to think about using an ordinary feature phone instead of a smartphone. I don’t think the show would bring instant changes. But I wish hanbok would be considered as a unique fashion item that can accent your look in the near future.