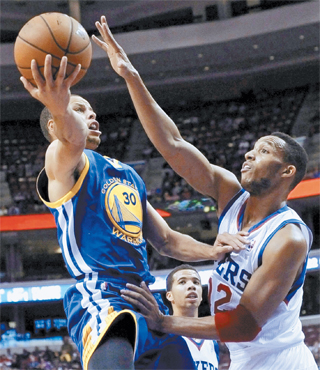 Golden State Warriors’ Stephen Curry, left, drives to the basket past Philadelphia 76ers’ Evan Turner during the first half on Monday in Philadelphia. [AP/NEWSIS]

PHILADELPHIA - Andre Iguodala made a career-high seven 3-pointers and scored 32 points, Stephen Curry had 18 points, 12 assists and 10 rebounds, and the Golden State Warriors handed the Philadelphia 76ers their first loss of the season, 110-90 on Monday night.

The overachieving 76ers (3-1) were one of the early surprises of the season. Iguodala, a former Sixers All-Star, brought them back to reality.

Iguodala was sensational, setting the pace early with six 3s and 27 points in the first half. He also made the play of the young season, a behind-the-back, midair assist to David Lee. Iguodala whipped it from about the 3-point line and hit Lee in stride down the lane.

Carter-Williams, the Eastern Conference player of the week, missed 13 of 17 shots and scored 18 points. Iguodala had scored only 26 points the first three games. The preseason Las Vegas pick as the worst team in the NBA, the Sixers beat Miami and Chicago to put them on the brink of their first 4-0 start since 2000-01.

Staying undefeated was never much of an option after the opening minutes.

Iguodala hit three 3s in the first quarter to torment his former team and help Golden State build a 16-point lead. Iguodala was traded in 2012 to Denver as part of a four-team trade that saw the Sixers land Los Angeles Lakers center Andrew Bynum. Bynum never played a second for the Sixers and signed with Cleveland. Iguodala left the Nuggets to sign with the Warriors.

Much like his Philly days, Iguodala was on the high-flying finishing end of a few alley-oops that sparked the offense. “When I was here, that was just natural to me to make plays like that,” Iguodala said.

Curry had a perfect view from the other side of the court of Iguodala’s catch-and-release pass. “I’m sure we’ll be seeing a lot of that on TV the next couple of days,” he said.

“I wasn’t even thinking about scoring,” Iguodala said. “It just kind of happened liked that.”

Booed during pregame introductions, Sixers fans were left impressed with his dunks.

Lee scored 14 points in the first half to help Golden State lead 66-42 at halftime. The Sixers had rallied in the second half in each of their first three games, and never led to open the fourth. They trailed 98-65 in this one.

Carter-Williams joined Shaquille O’Neal as the only NBA players to win a player of the week award to open a career. The No. 11 pick in the draft averaging 20.7 points and 9.0 assists in three games. He also outplayed Washington’s John Wall and Chicago’s Derrick Rose in the eye-opening efforts.

Curry simply toyed with the rookie. He shot 7 of 16 and grabbed seven defensive rebounds. After his 10th assist late in the third, he was pulled. Golden State coach Mark Jackson rested his starters in the fourth with the game out of hand.