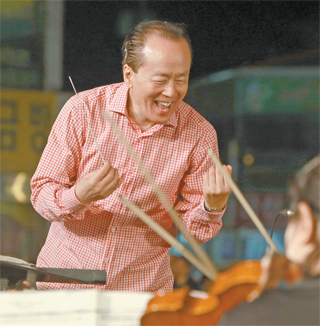 Despite growing up in a remote part of Korea, Jang-yoon has been playing oboe in the Ttangkkeut Orchestra for six years. “Ttangkkeut” means “end of the land” in Korean, which is how Haenam, located in the extreme south, is often described.

In August, he showed off his skills by collaborating with other youth orchestras from rural areas at the Sejong Center for the Performing Arts in Seoul. Two hundred young people joined together to give a two-hour concert, performing pieces such as Brahms’s Academic Festival Overture and Antonin Dvorak’s Symphony No. 9.

Six years ago, when Jang-yoon was dragged by his mother to the Ttangkkeut Orchestra, he was just a shy boy, too afraid to stand in front people. Now, however, Jang-yoon has changed. He boasts about being the only one in his age group who can play an oboe in Haenam.

Thanks to his improved self-esteem Jang-yoon is doing better at school, too, going from being just an average student to having grades in the upper 10 percent of his class. Jang-yoon describes the orchestra as a “healing” experience for him after the death of his father to a rare disease eight years ago caused him to experience many struggles. Now Jang-yoon dreams of going into medical research and finding a cure for diseases like the one that killed his father.

There are dozens of success stories like Jang-yoon’s all over Korea, thanks in large part to Gum. The 66-year-old conductor is the man behind the Eurasian Philharmonic Orchestra and the Incheon Philharmonic Orchestra, but those are prestigious institutions, far away from country boys like Jang-yoon. The Ttangkkeut Orchestra, however, is one of the 20 rural orchestras throughout the country that belong to the Korea Young Dream Orchestra.

Gum has been the director and the conductor of the orchestra since it was established in 2011 by the Hope Foundation for Rural Community. The orchestra is made up of young people from rural areas as well as multicultural and low-income families. It is modeled on Venezuela’s El Sistema, an organization founded in 1975 by economist and musician Jose Antonio Abreu, who initially gathered together 11 young students from the slums.

Starting last January, Gum and his fellow musicians began traveling to 20 rural areas to teach elementary, middle and high school students and hold regional concerts. His teaching style is as much about the spirit of music as it is technique. Every summer, he selects 10 students from the 20 orchestras and brings them together in Seoul for a Dream Orchestra concert at the Sejong Center for the Performing Arts.

Gum is not a man with time to spare. But he took up the position of directing and conducting the Dream Orchestra on top his many other jobs and posts because of the students.

To hear more about his passion for teaching music to students in rural areas, the JoongAng Ilbo recently interviewed the busy maestro during his lunch break at the Eurasian Philharmonic Orchestra’s office in Chungmu Art Hall, central Seoul. Here are some excerpts from the interview.

Q. Tell us about your first encounter with the amateur orchestra, composed of elementary and middle school students in rural areas?

A. I think it was 2010 when Rhee Jin-bae, executive director of the Hope Foundation for Rural Community, which is an affiliate of the Korean Horse Affairs Association, visited me without notice. He told me that there’s a desperate need for people who can cultivate the arts in students in rural areas, where it’s relatively difficult to encounter such opportunities. He explained to me about El Sistema in Venezuela and asked me if I could form an orchestra composed of students from rural areas in Korea. I was as busy as I’ve always been, but I had no reason to reject his proposal because my music pursues the same thing.

It seems impossible for such amateur musicians to hold a concert at a grand theater like the Sejong Center for the Performing Arts. Who came up with the idea?

I and the members of the Eurasian Philharmonic Orchestra came up with the idea. There are many cases where students from rural areas are invited to Seoul to look around the capital, but there are few opportunities to perform in the concert hall of such a grand theater. We thought it would be really touching if they could perform a Beethoven symphony in the Main Hall of the Sejong Center for the Performing Arts. By doing so, the children become the subjects, rather than the onlookers. This will be an experience I will never forget - helping children understand that dreams can be realized despite difficult circumstances.

It’s hard to imagine those students who have not received a regular education in classical music to perform music pieces that are difficult even for veteran musicians.

A chef can grumble about the ingredients in front of him, but a good chef needs to be able to make delicious dishes with those ingredients. It may be easy to conduct excellent musicians in an excellent orchestra. But it’s also the role of a conductor to help students play well while enjoying what they do. Of course, there’s a system we follow, as well. Twice a year, we hold seminars for the conductors of the 20 rural orchestras in the Dream Orchestra. They help students practice a piece that’s already been selected by me. Before the joint concert, the students come up to Seoul five days earlier to practice at the training camp, staying together under one roof. All day long they receive lessons from me, the members of the Eurasian Philharmonic Orchestra and the members of the Korea United College Orchestra, and they rehearse as well.

How do you define yourself as a musician? Some say that you try to do too much.

Just because we performed on the street of a market, that didn’t make us sloppy or try less hard. All 60 members of the orchestra performed as diligently as they would in any other performance. For me, this is music. Rather than being surrounded by classical music devotees who purchase expensive tickets in large halls, my music needs to breath together with the society. That’s when I can feel life in music.

You’ve conducted numerous orchestras, ranging from the Berlin Philharmonic Orchestra to the Korea Young Dream Orchestra. Which orchestra do you treasure the most?

(Next year, Gum says he hopes to hold a concert at Seoul Plaza, in front of City Hall, together with all 1,000 members of the Korea Young Dream Orchestra. Currently, each regional orchestra sends only 10 students for the concert at the Sejong Center for the Performing Arts. But he wants them all to get the chance to perform in Seoul.)