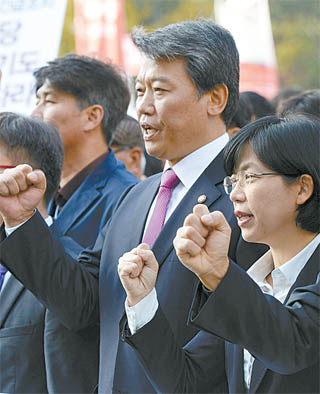 Lawmakers from the Unified Progressive Party protest yesterday at Seoul Plaza over the government’s decision to ask the Constitutional Court to dissolve their political party. [NEWSIS]

The Park Geun-hye administration yesterday took the unprecedented step of asking the Constitutional Court to dissolve a minority political party accused of having links to North Korea.

In a meeting hosted by Prime Minister Chung Hong-won, the cabinet approved a motion to seek a Constitutional Court trial to disband the Unified Progressive Party, the third-largest party inside the National Assembly. It was the first time the government took legal action to dissolve a political party.

The UPP has six lawmakers, including Representative Lee Seok-ki, who is on trial for high treason charges along with other senior party officials. While the petition was not scheduled to be deliberated at the cabinet meeting yesterday, the Ministry of Justice introduced it as an emergency item. Shortly after its approval, President Park, currently in London, formally signed it and the government submitted the petition to the court around noon.

Since August, the government has raided homes and offices of senior UPP officials including Lee and has arrested them on charges of conspiring to overthrow the government. Lee was indicted on charges of plotting a rebellion by forming a pro-Pyongyang underground group called the RO, or Revolutionary Organization.

Following the probe, the Ministry of Justice began a legal review on Sept. 6 to file a petition to disband the UPP.

“The objective of the UPP, including its platform, was based on North Korea’s socialism, which is against the basic orders of liberal democracy as stipulated in our Constitution,” said Justice Minister Hwang Kyo-an at a press briefing. “Our analysis also showed that the conspiracy to overthrow the government by the RO, the key group of the UPP, was following the North’s South Korea strategies.”

Lee Jung-hee, chairwoman of the UPP, condemned the government for trying to disband her party and compared President Park to her father, Park Chung Hee, whose authoritarian regime ruled the country from 1961-79.

“President Park is bringing back her father’s ghost to oppress democracy and destroy justice,” Lee said.

“The conspiracy to remove the UPP using an obsolete legal clause will reverse the history of Korea’s democracy to the Yushin era,” Lee said, referring to the final years of the Park Chung Hee regime. “During that period, the military was mobilized to dismiss the National Assembly, and emergency decrees were used to eliminate political opponents under the banner of liberal democracy.”

The Constitutional Court vowed yesterday to give an impartial ruling. According to the court, the mechanism of dissolving a political party was introduced in 1960, but there has not been a case until now.

The court has 180 days to rule on the case. The dissolution will be sanctioned if six out of nine justices of the court agree. The court also has the authority to suspend the party’s activities during the trial.

The National Election Commission would oversee the disbanding process, and the party’s assets would be absorbed into the state coffers.

The Unified Progressive Party was formally established in December 2011, but its history goes back to the Democratic Labor Party, founded by the Korean Confederation of Trade Unions in 2000.

In the April 2012 general elections, the UPP became the third-largest group inside the National Assembly, winning 13 seats. But in the aftermath of a rigged internal election primary, seven lawmakers left the UPP in August 2012, and the Justice Ministry said yesterday that the UPP is currently under the sole control of the pro-Pyongyang group.

The fate of the UPP’s six lawmakers, including two proportional representatives, remains unclear and the National Assembly and the National Election Commission said they will have to wait for the Constitutional Court’s ruling on the lawmakers’ statuses.

The Ministry of Justice said yesterday it also asked the court to strip the six lawmakers of their posts inside the legislature and filed an injunction to suspend the UPP’s activities for the time being.

The ministry also issued a 33-page press release to explain the reasoning behind the action against the UPP.

According to the ministry’s statement, the UPP, since the start of its predecessor Democratic Labor Party in 2000, acted under the directives of North Korea. The party’s continuing existence will likely endanger Korea’s existence, the ministry said.

It also said the UPP’s highest ideology came from the founding philosophy of North Korea promoted by Kim Il Sung. The UPP’s aim to build a “world owned by the workers” means taking away sovereignty of some classes while giving sovereignty only to workers, the ministry said, and that idea goes against the nation’s principle of sovereignty of the people.

The UPP also treated the National Assembly as a “bridgehead for revolution” and denied the democratic election system by rigging internal primaries to elect pro-Pyongyang officials as proportional representatives, the ministry said.

The ruling Saenuri Party said it respects the government’s decision, calling it an “inevitable move to protect the nation’s constitutional values and order.”

The largest opposition Democratic Party showed concern about the government’s move, stressing that voters are mature enough to make a decision on the UPP’s fate in elections.

“It is regretful to see this unfortunate, unprecedented incident,” said Representative Kim Kwan-young, spokesman of the DP. “Under any circumstance, the basic order of liberal democracy must be maintained and objectives and activities of all political parties must be protected within its framework.”

Kim lamented that the Park administration chose to take the case to court rather than asking the public to make a judgment through elections.