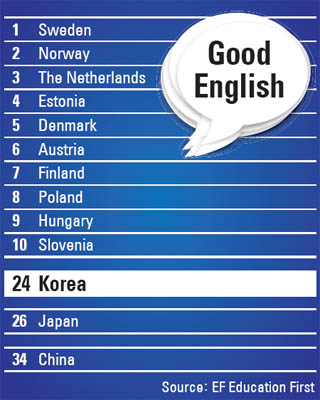 Despite the time and money Koreans dedicate to learning English, the country ranked 24th out of 60 countries in terms of its English ability, a Switzerland-based global English education company reported yesterday.

Yesterday’s report is disappointing news for parents in a country that has English-only kindergartens for pre-school children where monthly tuitions can go well over 1 million won ($942).

In announcing the results of the English Proficiency Index organized by EF Education First, the global education company said Korea made it into the moderate proficiency group, along with Japan, which was ranked 26, and Vietnam, 28. China fell in the category of low-proficiency with a rank of 34.

To come up with the scores, the company did tests on 750,000 adults from 60 non-native English-speaking countries last year

In its report, the institute said that despite an across-the-board zeal for English learning in Korea - which leads to Koreans spending nearly 20,000 hours learning the language from elementary school through college - the country has not seen a significant improvement in its English level “while the rest of Asia had made dramatic gains.”

The institute said Korea’s problem was “its focus on memorization and grammar,” pointing out that its “students graduate with technical skills, but many lack the ability to communicate with others in English.”

The latest survey was the third of its kind and EF analyzed the results of the three tests conducted on five million adults worldwide over the past six years.

The company said while Indonesia and Vietnam in particular have shown a transformative improvement in their English proficiency over the six-year period, Japan and Korea have been stagnant in their proficiency levels despite “enormous private investments.”

The test organizer said Turkey has improved the most out of the 59 nations while China also showed great improvement.

It said China’s improvement was “a major achievement” that reflected “the enormous amount of energy Chinese government and Chinese companies” have invested to meet growing demand from international firms operating there.

Hong Kong was placed 22nd in rank, followed by Spain and Korea, which is not a very good score for a former British colony.

European countries dominated the top 10 slots although, the EF noted, France was “on an entirely different trajectory.” France was one rank behind China at 35.