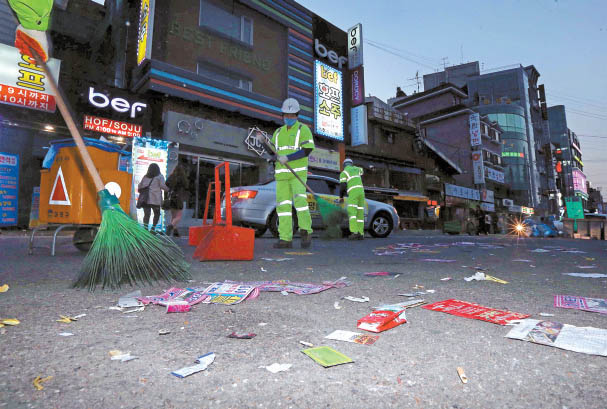 Street cleaners work to clear an area in Hongdae on Oct. 26. Kim Duk-jung, a Mapo District Office team leader, said that illegal flyers make up about 70 percent of the waste around Hongdae. By Oh Jong-taek

On a recent Friday night, one of Seoul’s most popular thoroughfares, the street in front of Hongik University - known as Hongdae - was flooded with revelers, bar hoppers and college students.

Around 7 p.m., four street cleaners emerged and began the tedious routine of removing trash from the street.

They picked up discarded cigarette butts, paper cups and cans until 9 a.m. when the area was finally cleared.

But as they left, more people flowed into Hongdae and the situation began to change.

After 10 p.m., the streets were once again covered with garbage. Flyers - many of them advertising sexually explicit promotions - littered the ground.

Hawkers spread their material to passersby, and some even threw their handouts into the air as they drove through on motorbikes.

The flyers quickly spread - under foot, through hands and by the wind - until the place once again became a dump. By dawn, the street was carpeted with paper.

“There are so many foreign tourists these days in the Hongdae area,” said Lee Nu-ri, a student who was in Hongdae that night, “and it’s unpleasant and embarrassing when I see these flyers advertising prostitution lying on the street.”

Hongdae’s 220-meter-long “car-less stretch” - where vehicles are restricted during certain hours on the weekends - was in an even worse state.

“On Friday night, the flyers start to pile up until the weekend, and then the street is entirely covered with them,” said a man surnamed Lee, who runs a supermarket near the tourist area.

Simply put, trash is becoming an issue in Hongdae.

And so much so that officials are now beginning to worry that excessive refuse is compromising the area’s tourist-friendly feel. Of particular concern is the illegal distribution of flyers, which often promote risque clubs or events.

From May to September, the estimated amount of trash collected on the weekends around Hongdae - Seogyo-dong of Mapo District - averaged about 5 tons, which is about four times the daily average at 1.2 tons.

Illegal flyer distributors are typically fined between 18,000 won ($16) to 35,000 won depending on the number of the handouts disseminated.

Mapo district has a flyer regulation team, which typically patrols from 9 a.m. to 5 p.m.; and maybe once every one or two weeks they will conduct a night inspection until 10 p.m.

However, because most flyers are spread after 11 p.m., those passing around handouts can easily avoid reprimand. The district had no violations on record for this year.

“Since the phone numbers on the flyers are usually phone numbers with borrowed IDs, it’s difficult to track them without the help of the police,” said a representative from the Mapo District Office.

“Those throwing the flyers also disappear directly afterward, so those individuals are also difficult to track down.”

A shortage of workers and access to funding compound the problem, the representative added.

In reality, the people available who can work until dawn around Hongdae are limited, he said, which further stymies proper regulation.

Still, some point out that successful regulation is largely contingent on how seriously district offices tackle the issue.

Gangnam District Office has made noticeable headway in this arena.

Last July, the office expanded its illegal flyers regulation team, which managed to confiscate 58,000 flyers and reprimand 28 people in charge of distributing them.

They also created a team dedicated to eradicating the distribution of sexually explicit flyers, which collaborates with the Suseo Police Precinct. The team is made up of 150 people who work from 5 p.m. to 11 p.m.

“Until this year, it was impossible to walk around the streets of Seolleung and Gangnam Station without stepping on the flyers,” said Kim Min-jong, an officer at Gangnam District Office.

“But now you can barely find these flyers on the street.”