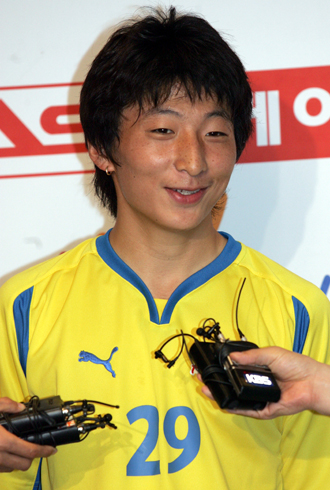 Six of the seven football coaches in the women’s K-League are under fire for attempting to have forward Park Eun-sun - who plays for the Seoul city government women’s football team - kicked out of the league. The coaches say that Park needs to take a sex test because her gender wasn’t clarified when the issue was first raised before the 2010 Asian Cup.

Park’s coach is not among those seeking to have her removed.

The coaches recently had a closed-door meeting at the office of the Korea Football Association (KFA) in Jongno, central Seoul, and agreed to file a complaint with the KFA to ban Park from playing in the league until her gender is verified. They notified Oh Gyu-sang, the chairman of the Korea Women’s Football Federation, before they decided to file a complaint with the KFA. Some of the coaches said they would boycott league games if the KFA doesn’t comply with their demand. The complaint has not yet been filed.

Park, 26, is 180 centimeters tall (5.9 feet) and weighs 74 kilograms (163 pounds). She has been nicknamed “the Park Chu-young [an Arsenal striker] of the women’s league.” She was selected as a member of the women’s national football team at the age of 16 during the 2003 World Cup in the United States and was the leading scorer in the 2004 U-21 Football Championship. She also played for the national team in the 2004 Athens Olympics and the 2005 East Asian Cup.

Before the 2010 Asian Cup, the Chinese team said they would ask the event’s organizing committee to conduct a gender examination on Park if Korea brought Park to the event. Then, Korea dropped Park from the team.

“Neither the KFA nor the women’s football federations made a clean explanation about her,” said Lee Sung-kyun, coach of Suwon FMC. “Park is one of the best players in the league, but the KFA hasn’t included Park on the national team for some reason. We judge that there is a problem with Park playing in the league.”

Fans strongly criticized the six coaches, saying they are trying to eliminate the league’s best striker in order to win more games. Park was the league’s leading scorer this season with 19 goals, and led the Seoul city government football team to a second-place finish. Football analysts say the coaches’ claim isn’t rational because they never complained about Park before the season.

“We all know that Park is better than most of the other players in football,” one coach said anonymously. “To defend Park, about three to four players got injured in every game. This can’t be explained only with gaps in football skills or physique between Park and other players.”

“I can’t believe this is happening again,” Park said on her Facebook page. “I have gone through the gender examination thing several times. I did it in a World Cup, in an Olympics and in several others and there were no problems. I did it when I was young and I was mortified by them [tests]. No matter what your dirty plans are, I will not give up. My father, who must have heard of this in heaven, and my mother, brother and sister are crying bitter tears. I will try my best to make you feel dirty, just like I do.”

Park’s father died in 2010 due to osteomyelitis, a bone disease. She lives in a shipping container with her family.

“This is a serious issue that must be managed carefully because we are talking about someone’s human rights here,” a spokesman for the women’s football federations said. “I feel very sorry for Park, who must be hurt again with this issue.”