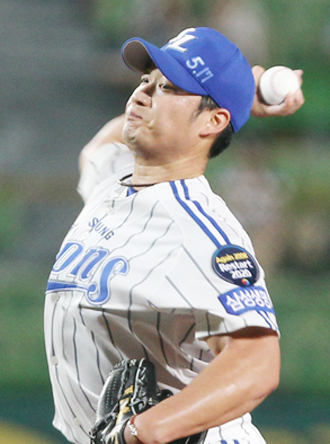 The Lions said on Tuesday that they have officially notified their 31-year-old right-hander that he can negotiate with teams in the Nippon Professional Baseball and Major League Baseball leagues, and that they will help Oh make a successful contract with a foreign team.

Having made his debut in 2005, Oh earned the right to become a free agent after serving eight full-time seasons. But that free agency right only extends to the domestic league. According to Article No. 142 of the KBO rule book, Oh needed permission to move to a foreign league, and that should have been in his ninth season.

The system was created by the KBO to keep their star players as long as possible because most Korean teams cannot begin to compete with the astronomical salaries offered abroad. Only after nine seasons does a player get the right to sign anywhere in any country.

Kia Tigers’ ace pitcher Yoon Suk-min, who is also knocking on the door of Major League Baseball, is an example of a player who has reached the nine-year free agent mark.

If Oh wants to play in North America, he will need to go through the “posting system,” when major league teams bid on a player, with the Lions receiving the winning bid as a transfer fee.

The rules are different for the Nippon league. Oh can negotiate with any Japanese team, then that team negotiates a transfer fee with the Lions. If the Lions think the transfer fee is too low and doesn’t accept it, Oh would stay in Korea for one more year as a Lions player.

“We couldn’t find a reason [to make him stay with us],” said Song Sam-bong, general manger of the Lions, to reporters. “It will be a huge loss for the team, but we decided to let him go, as we promised last year. He has contributed to the team’s championships, since he played with the team since 2005.”

“He wanted to play in a foreign league for the 2013 season, but we persuaded him to stay for one more year, to win three consecutive KBO titles,” Song added. “He has done what was asked for, and we judged that it is our turn to keep our promise.”

“The level of interest is quiet serious,” Kim said. “Those four MLB teams have asked for details, including about the posting system after the Korean Series was over. And everyone knows that many Japanese teams have been interested in Oh for a long time.”

Kim declined to name the interested teams, but insiders say the New York Yankees and Los Angeles Dodgers are among the American teams interested, while Hanshin Tigers and Softbank Hawks are among the Nippon league teams.

“The most important things Oh will consider in signing are being a closer, no matter which team he signs with, and he wants to play for a team that has a large Korean community,” Kim said.