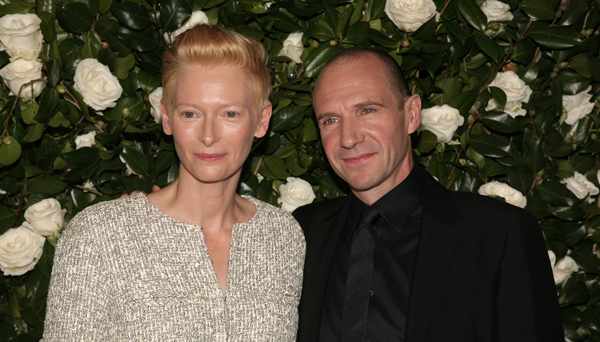 NEW YORK - The last time Oscar-winning actress Tilda Swinton had a birthday party, she told a New York audience on Tuesday, she was 9 years old.

“We had a trampoline,” she said. “But who knew that 53 would top even that?” Tuesday was not only her 53rd birthday but the occasion of a glittery gala at the Museum of Modern Art, honoring her contribution to cinema.

Among those paying tribute to Swinton were David Bowie, Ralph Fiennes, designer Karl Lagerfeld and Vogue editor Anna Wintour, all of whom co-chaired the event, and other luminaries like director Sofia Coppola, actress Jessica Biel, actress Lupita Nyong’o of “12 Years a Slave,” and also New York Mayor Michael Bloomberg - just as Democrat Bill de Blasio was being elected to succeed him as mayor.

“I’m a film nerd,” Swinton told the crowd, explaining her choice of career. “I continue to do it simply because I continue to believe that film is good for the soul.”

The Scottish actress, who won a best supporting actress Oscar for “Michael Clayton” in 2007, is also known for her fashion sense, and she wore Chanel, which sponsored the evening - flowing white trousers and a light gray tweed jacket. Designer (and “Project Runway” host) Zac Posen, one of the guests, called Swinton’s fashion style “Impeccable, risky and cutting edge. She’s incorporated fashion as an art form, and as a design.”

But it was director Wes Anderson, who directed Swinton in the upcoming film “The Grand Budapest Hotel” as well as the recent “Moonrise Kingdom,” who, in absentia, best described Swinton’s pale, ethereal look. The actress is “almost the color of a cloud,” Anderson said in a statement read by Fiennes, who co-stars in the new Anderson film. “Yet everything pales beside her.”

Swinton will also soon appear internationally in “Snowpiercer,” by director Bong Joon-ho, who regaled the crowd with a tale of Swinton demanding to look uglier in the film - with false teeth, a “piggy nose” and sagging breasts.

A montage of Swinton’s work was shown, highlighted by clips from “Orlando,” “Burn After Reading,” and of course “Michael Clayton,” in which she played a ruthless lawyer willing to stop at nothing to protect her corrupt company’s secrets.

Fiennes spoke of the “wisdom and humor” in Swinton’s work, and told her: “I think you shine a sharp and uncompromising beam onto your work.” Before the event, he noted that even though he only recently met Swinton, working on their current film, “I’ve admired her since I was a student. She’s unique, and a great artist.” He also said that despite her dramatic intensity, she’s good at comedy, and has a great sense of humor.

Indeed, Swinton had the crowd in giggles when she explained that when she feels uncomfortable appearing in public, she recalls the words of a former nanny: “Nobody’s going to be looking at you anyway, Matilda.”