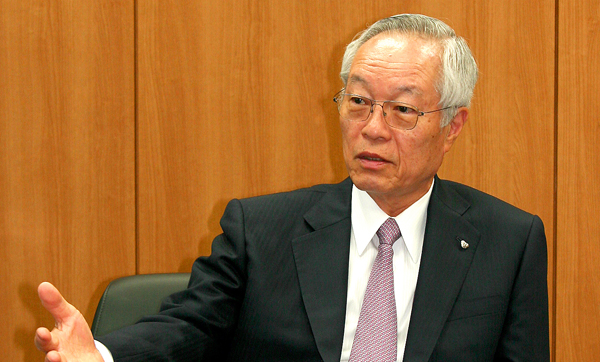 OSAKA, Japan - In the heart of Osaka, Dotonbori Street can be compared to New York City’s Times Square. One of its main landmarks is a 25-meter (82-foot) electronic display showing a runner coming across the finish line with his arms outstretched.

Glico Man, as he is known, has been celebrating his victory in the same spot for nearly eight decades.

Glico Man is the symbol of one of Japan’s most famous confectionery companies, which now has big plans to expand its presence in neighboring Korea.

In an interview with the JoongAng Ilbo at the company’s headquarters in Osaka late last month, Glico CEO Katsuhisa Ezaki admitted it has taken a long time for the Japanese confectionery company to land in the Korean market despite its geographical closeness.

“Glico, which has expanded to roughly 30 or so countries across the globe [since its establishment], has taken 91 years to arrive in neighboring Korea,” Ezaki said.

The 72-year-old Ezaki is a third-generation descendent of the company’s founding family.

Glico entered the Korean market through a joint venture with the Korean confectionery company Haitai in 2011 to launch Pocky, the original chocolate-covered biscuit stick, know better to Koreans through Lotte’s similar product, Pepero.

The Korean company invested 40 percent in the joint venture while Glico has a 60 percent stake.

Nov. 11 is now considered Pepero day in Korea, on which people exchange the popular snack to show good will or romantic intentions.

Pocky, first launched by the Japanese company in 1966, is a steady seller, and the company sells roughly 500 million boxes every year across the world.

Ezaki said Korea’s unique retail distribution structure was the main reason it took so long for the Japanese company to enter the country.

“In Japan, the manufacturer’s work is complete when it supplies its product to the wholesaler, but in Korea, the manufacturer delivers the goods even directly to the retail operators,” Ezaki said. “This is an unusual structure in the global market.”

Ezaki hinted that such a distribution system acts as an entrance barrier for foreign companies without their own distribution networks.

This was the reason why it joined forces with Haitai. Ezaki said Glico’s strategy was not to focus its energy on competing with local brands but creating synergy by complementing its partner’s strength.

In the joint venture with Haitai, Glico is passing down its own know-how and manufacturing technologies in making Pocky-like snacks while the Korean company provides its own knowledge and distribution to retailers.

The Japanese CEO was confident that Glico’s products will succeed in grabbing the attention of Korean consumers.

“Since there is a similarity in preferences between Japanese and Korean consumers, Glico products that have succeeded here will also succeed in Korea,” Ezaki said.

Glico has not only been successful with Pocky but other products ranging from ice cream, milk, pudding and even curry.

“The launching of Pocky in Korea is just the beginning,” Ezaki said. “We plan on expanding our products in Korea.”

He added that high-quality Glico products marketed in smaller packaging will have a competitive advantage over Korean products sold in larger quantities as the family structure in Korea changes.

He cited the fact that the number of people living alone has been growing sharply, particularly in the greater Seoul area in recent years.

Ezaki wasn’t overly concerned about the aging population in both countries. Instead, he said, they represent an opportunity to broaden his customer base to a different generation while also expanding the development of more healthy products.

“Glico’s philosophy of contributing to health through [good] taste is becoming more valid as times change,” Ezaki said. “We plan to introduce to the Korean market healthy products that resulted from extensive research and development such as low-calorie ice cream or gum that prevents cavities.”