Jae-joong rocks out on Asian tour

Jae-joong rocks out on Asian tour 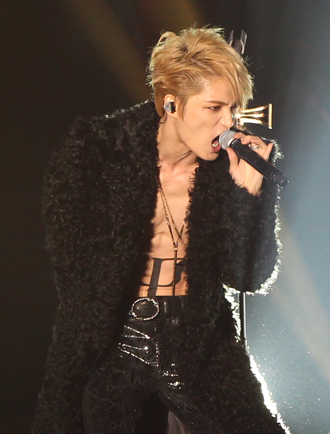 Singer Kim Jae-Joong of the K-pop trio JYJ has taken the next big step as a solo artist, having released his first full-length album at the end of October.

Along with the album, Jae-joong also kicked off his latest Asia tour last weekend, starting at the COEX mall in southeastern Seoul for some 14,000 fans.

In addition to a high-energy show, Jae-joong surprised his fans with some big-name guests, including singers Kim Bum-soo and Gumi.

Unusually for the world of K-pop, Jae-joong writes or co-writes a large number of his songs, and rather than K-pop’s typical dance-pop, Jae-joong focuses more on emo-rock. He released a mini-album in January, but this is his first full album.

Next up for the star are four more concerts over the next month, as his tour takes him to Yokohama on Nov. 15 and 16, to Taipei on Nov. 23, and Nanjing, China, on Dec. 7.

Q. How would you describe your coming concert tour?

A. I’m going to sing more Japanese songs for the Japan concerts. Also, I’ll have different concepts with the audience “dress code” in different countries.

What does the album title “WWW (Who When Why)” mean?

Those are the basic words you have when you fall in love. To love, you have to have someone, and it is important where you meet that person and why you meet. Depending on the style of the songs, I sometimes try to express love in a direct way and other times in a smoother way.

Did you expect to see your album top the iTunes charts in 12 countries?

I was very surprised. I was especially amazed to see I was No. 1 in rock music. I think some who don’t know Kim Jae-joong listened to the album.

Is there any reason why you prefer to play rock music?

It is a genre I’ve liked since I was young. I worried it might be hard for me to pursue it professionally, but I wanted to try at least once. So I took up the challenge and am trying to develop my own style.

After a decade in the music business, what is your biggest worry?

After a month, I’m celebrating my 10th year since my debut. I think I’m returning [to the basics] as I reach 10 years. I want to go back and try achieving new goals.