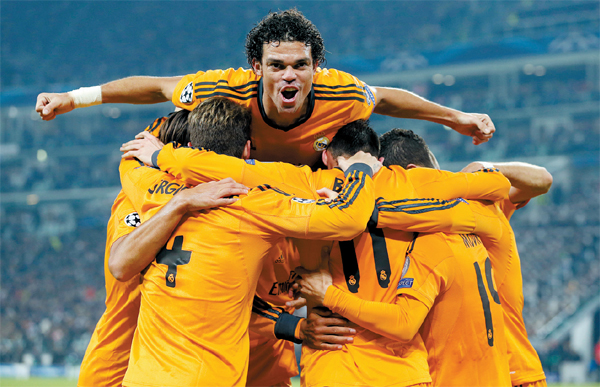 TURIN, Italy - Real Madrid was held to a 2-2 draw at Juventus on Tuesday, leaving the Spanish side on the verge of qualification for the Champions League knockout stages.

Juventus dominated in the first period and Arturo Vidal gave the Italian side a deserved halftime lead from the penalty spot after Paul Pogba was fouled by Raphael Varane.

Cristiano Ronaldo leveled for Madrid with his 21st goal in 16 matches this season and set up another minutes later as Gareth Bale put Carlo Ancelotti’s side in front.

Madrid dropped its first points but remains top of Group B with 10 points, while Juventus slips to bottom after Copenhagen beat Galatasaray 1-0.

Madrid won its three previous Champions League matches to take a commanding lead of the group. Juventus had just two points and knew it had to win to have a realistic chance of advancing.

Antonio Conte’s team attacked from the outset and Pogba had an early opportunity, but fired wide of the left upright from distance.

The visitors again went close moments later when the world’s most expensive player, Bale, won a challenge with Martin Caceres for the ball but his tame effort was easily saved by Juventus goalkeeper Gianluigi Buffon.

Juventus should have scored in the 16th minute when Pogba’s cross was almost turned into his own net by Pepe, but Iker Casillas managed to save at point blank range. Although he spilled the ball, no one could take advantage and the danger was cleared.

The Italian side went closer shortly before the 30th and Claudio Marchisio seemed almost certain to score with a header, but Casillas did brilliantly to deflect it past his right post with his leg.

Madrid was camped out in its own half and reduced to trying to hit Juventus on the counterattack. Bale went close when he curled a shot narrowly past the far corner.

Juventus broke the deadlock when Varane slid into Pogba and referee Howard Webb pointed straight to the spot. Vidal stepped up and fired into the top right corner to send Juventus Stadium into a frenzy.

Ronaldo had a chance to equalize on the stroke of halftime but spooned his effort horribly over the crossbar as he was bumped by teammate Karim Benzema.

It was the Portugal star who leveled seven minutes after the interval, chipping Benzema’s through-ball over the onrushing Buffon for his eighth goal in this season’s group stage, matching the record held by Ruud van Nistelrooy, Filippo Inzaghi and Hernan Crespo. AP