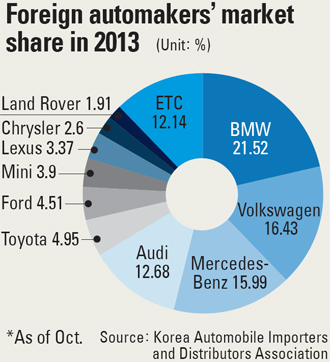 Foreign automakers sold 130,239 units in Korea this year through October, surpassing their sales for all of last year.

Import sales in October were 17.8 percent higher year-on-year and 11.7 percent higher than in September, according to the Korea Automobile Importers and Distributors Association yesterday.

European cars remained the most popular. BMW was at the top of the list with sales of 2,939 units in October, and Volkswagen was second with sales of 2,890, its best month since the automaker established a separate Korean branch in 2005. Mercedes-Benz sold 2,238 units and Audi 1,803.

Ford, which sold 702 units, was the only American automaker ranked in the top five.

Buyers were concerned with economy, as small cars with engine displacements of less than 2,000cc accounted for 57.7 percent of sales, followed by models with displacements between 2,000cc and 3,000cc (29.5 percent). Diesel cars made up 66.6 percent of October sales, compared to gasoline cars (30.4 percent) and hybrids (3 percent).

Volkswagen’s Tiguan 2.0 TDI BlueMotion and Passat 2.0 TDI were the top sellers in October with sales of 736 and 588 units, respectively.

BMW’s 520d ranked third with 555 units last month, but it was the best-selling import this year with 7,465 cars sold. The Tiguan 2.0 was the runner-up in the past ten months.

Ssangyong Motors posted the biggest growth among domestic manufacturers, with a year-on-year leap of 48.2 percent. It was the company’s best monthly sales in seven years.

GM Korea sales were up 5.8 percent year-on-year at 13,922 units, the highest this year. Renault Samsung Motors also had its best month of the year with sales of 12,729 units.

“Some contend Korean automakers produce quality cars only for export, while domestically sold cars are of less quality. Such negative impressions lead consumers to turn to imports,” said Ju Won of the Hyundai Research Institute. “Korean consumers make product quality and their own taste top priorities. They don’t feel obligated to purchase local products, as they have choices from all over the world.”