In a rarity, Samsung hosts analysts

In a rarity, Samsung hosts analysts 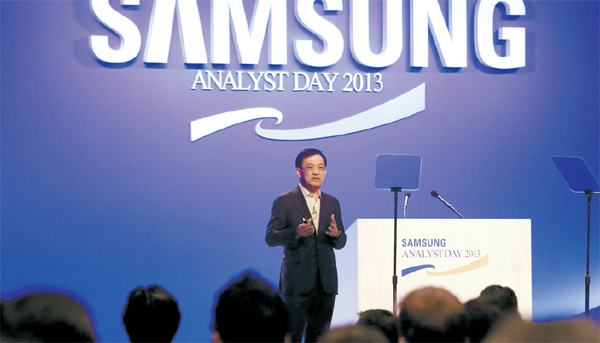 At a rare conference with analysts yesterday, Samsung Electronics said it intends to be more aggressive with buyouts to demonstrate its potential - and will - to keep growing.

The world’s largest maker of smartphones, televisions and memory chips held its Samsung Analyst Day at the Hotel Shilla, the first of its kind in eight years. About 400 analysts, roughly half of them from overseas, attended the event, the company said.

Many top executives of the tech giant took the stage, including Vice Chairman Kwon O-hyun, IT and Mobile Communications Division President Shin Jong-kyun and Consumer Electronics Division President Yoon Boo-keun, to address persistent skepticism about whether the company will be able to sustain its robust growth.

However, the company is rebounding, having sold more than 40 million Galaxy S4s as of last month, according to executives. Samsung posted record third-quarter earnings after extending its lead in the smartphone market and benefiting from a rally in chip prices.

Samsung Electronics Chief Financial Officer Lee Sang-hoon said the company will be more aggressive in acquisitions after spending about $1 billion on 14 companies since 2010. Those acquisitions included Sharp and Medison as the Suwon-based company tried to better integrate its hardware and software offerings.

“Going forward, we will expand our merger and acquisition strategy beyond a few target areas to pursue opportunities across a wide range of fields,” Lee said, adding that the company wants to “enhance the competitive edge of our current businesses and capture new chances for future growth.”

“We will put the name of Samsung Electronics in the top five global brands by 2020,” said Lee.

“Kwon, who expressed confidence about meeting the company’s $400 billion annual sales target by 2020, stressed that Samsung has much more room for growth through innovation in smartphones, displays, semiconductors and televisions.

“This year Samsung added the S4, released the Galaxy Gear smartwatch, introduced the first phone with a curved screen and registered designs for spectacles to challenge Google’s Glass in the wearable device market. 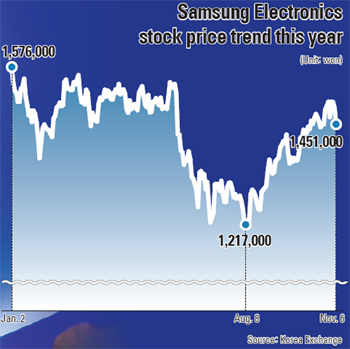 It sold about 120 million handsets in the third quarter, researcher Strategy Analytics said on Oct. 29.

The company will sell a combined 100 million units of its Galaxy S and Note series handsets this year, Shin said.

“People say the growth of the premium smartphone market will slow, but we don’t think so,” said Shin. “There are lots of opportunities for growth in various areas.”

Shin said the market for Long-Term Evolution (LTE) smartphones, the fastest broadband devices, will grow 30 percent on average through 2017. About 680 million smartphones will be shipped in 2017, half of them LTE enabled, he said.

“China and India come in first and third, respectively, in size of the mobile phone market, and a total of 3 billion users are still using feature phones. There is potential demand for smartphones and that could lead the growth,” said Shin.

The company, which overtook Apple in smartphones, has used sales of cheaper handsets in emerging markets to stoke earnings in mobiles as growth in high-end devices slows due to market saturation.

The mobile unit, responsible for about two-thirds of earnings, posted a record operating profit of 6.7 trillion won ($6.3 billion) in the third quarter as the company tapped demand in China and India for mid-priced handsets.

During yesterday’s event, Samsung also said it is considering increasing its dividend payout to investors to 1 percent of the share price, up from 0.5 percent last year.

The announcement came in response to the observation that Samsung’s stingy return to investors is helping to undercut the company compared with its rivals like Apple.

Some analysts said it is still insufficient.

“The amount of dividend is too small to lure many investors,” said Kwon Sung-ryul, a researcher at Dongbu Securities. “I think many analysts gathering here today would agree.”

“Samsung wants to communicate better with the market. The quarterly earnings announcement used to be the only channel that market observers and investors could use,” said Nam Dae-jong, an analyst at Hana Daetoo Securities, before the briefing. “The event should give a clearer outlook on the company in the longer term.”

The company has earmarked a record 24 trillion won in capital expenditures this year and spent about 63 percent of the total as of Sept. 30. Samsung’s spending this year alone is larger than the market value of Sony.

Samsung will spend $14 billion on research and development by the end of this year, compared with $8 billion in 2010, Lee said yesterday.

The chief officers of some other Samsung affiliates also attended the analysts meeting to project their confidence, including Kim Ki-nam, the CEO of Samsung Display, the world’s largest panel maker.

The growth engine for the display industry is shifting from television to mobile devices, and Samsung Display has successfully adopted the trend, Kim said.

The global display market amounts to $128 billion, and mobile devices make up about 38 percent of it, according to the company.

“We have entered the wearable devices market with the smartwatch this year and will expand the businesses into health care products and fashion products,” said Kim. “We also are planning to make inroads in such areas as auto and digital textbooks.”