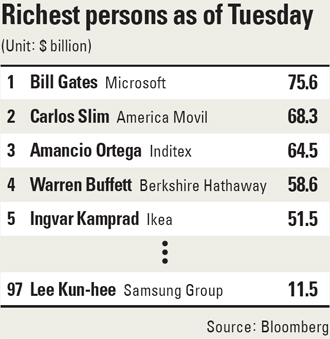 Samsung Electronics Chairman Lee Kun-hee has climbed back onto the list of the world’s 100th richest people, according to a daily list of 200 billionaires compiled by Bloomberg.

The Monday update of the list estimated Lee’s wealth at $11.7 billion, which put him in the 97th spot.

The 71-year-old Samsung Group leader was as high as 85th on the list last year, but the declining stock price of Samsung Electronics early this year dragged him down to 115th in August.

Hyundai Motor Group Chairman Chung Mong-koo was the next Korean on the list with net assets of about $7 billion, putting him in the 189th position.