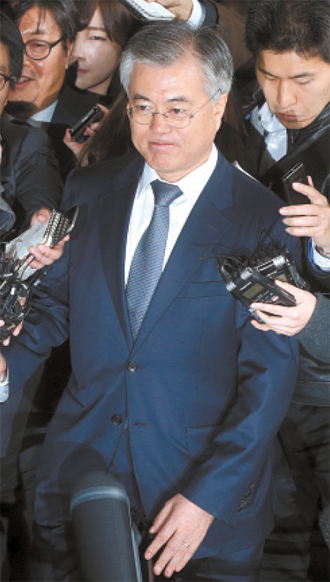 Moon Jae-in, chief of staff for the late President Roh Moo-hyun, was questioned by prosecutors about the mysterious absence of an inter-Korean summit transcript from the National Archives.

Moon showed up at the Seoul Central District Prosecutors’ Office in Seocho District, southern Seoul, at 1:50 p.m. yesterday, accompanied by his lawyer. Also present were over 150 supporters of Moon and the late Roh.

“People all know that President Roh Moo-hyun guarded the NLL (Northern Limit Line),” Moon told reporters before his questioning. “The transcript [of the summit] is intact.

When asked by reporters why the transcript wasn’t transferred to the National Archives, Moon did not answer.

Moon’s questioning was still underway as of press time yesterday.

In last year’s presidential campaign, a ruling Saenuri Party lawmaker alleged that Roh had disavowed the NLL, the de facto border in the Yellow Sea, at the 2007 summit with Kim Jong-il in Pyongyang, and said a transcript of the meeting proved it.

A source from the prosecution told the JoongAng Ilbo yesterday that prosecutors had a lot to ask Moon about the missing transcript. He was responsible for the transfer of presidential records to the National Archives at the end of Roh’s term in 2008.

Based on their investigation so far, prosecutors have tentatively concluded that Roh had commanded his subordinates not to transfer the transcript to the National Archives, according to the JoongAng Ilbo.

Moon and the DP have criticized the ruling party for illegally obtaining a confidential copy of the transcript stored at the National Intelligence Service, distorting its contents and using it to harm his chance of winning the presidency.

Prosecutors said last month that their search at the National Archives found no transcript. They concluded it was stored and later deleted from the Roh Blue House’s computerized administrative system, which was called e-jiwon.

But a private copy of e-jiwon that Roh made and took to his home in Bongha Village, South Gyeongsang, after his presidency, appeared to have the missing transcript, the prosecutor said.

After finding traces of the missing record, digital forensic experts of the prosecution managed to restore it.

The prosecutors already questioned key members of the Roh Blue House. Prosecutors are expected to announce the results of their investigation this week after Moon’s questioning.

Aides of the late president have rebuked allegations that the Roh government deliberately discarded the original transcript, claiming the original version was not transferred to the National Archives “because it was an incomplete version” that had misnamed some participants in the meeting.

Kim Kyung-soo, Roh’s speechwriter and now a director of the Roh Moo-hyun Foundation, said at a press briefing at the Seoul High Prosecutor’s Office on Oct. 9 that Roh administration officials produced a final version of the transcript after correcting the errors.

The ruling party continued its offensive against Moon yesterday. Yoon Sang-hyun, deputy floor leader of the party, said, “Moon must disclose the truth as he has staked his political career on the alleged NLL disavowal.”

Kim Han-gill, chairman of the DP, said yesterday it would not be acceptable if there was a “political motive to intentionally disgrace” Moon by questioning him as witness.

Kim also urged the prosecution to tell the truth about the leak of the summit transcript to the ruling party during the election campaign last year.