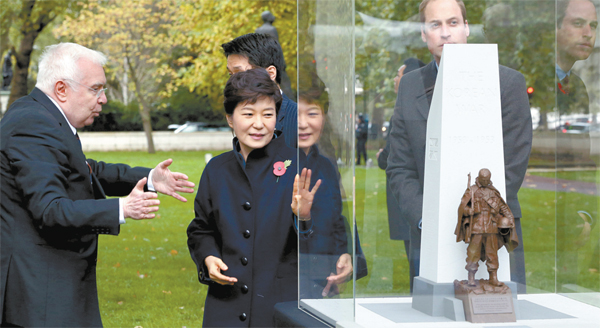 President Park Geun-hye looks at a model of a monument for British soldiers killed in the 1950-53 Korean War at a groundbreaking ceremony yesterday at the proposed site of the memorial at Victoria Embankment Gardens in London. Standing at the right is Prince William. [Joint Press Corps]

LONDON - President Park Geun-hye and British Prime Minister David Cameron vowed at a summit Wednesday afternoon to double the trade and investment volume between the two countries by 2020.

As an initial step toward that ambitious goal, the first Joint Economic and Trade Committee (Jetco) took place earlier in the day attended by the two leaders as well as some 150 businessmen and government officials from both countries.

Park and Cameron signed an agreement after the summit at 10 Downing Street to hold the Jetco meeting every 18 months, with venues alternating between the two countries.

The idea is that a better network among business leaders of both countries will lay a foundation for future business deals, said Cho Won-dong, senior presidential secretary for economic affairs. Citing the British proverb, “Good company makes the road shorter,” President Park said in a keynote speech at the Jetco meeting that if the two countries take advantage of the 130 years of trust and friendship to expand cooperation, the future would promise greater shared prosperity. “I hope today’s forum leads to blueprints for constructive cooperation and, eventually, to big results.”

Trade volume between the countries tallied $11.26 billion and the combined investments in each other totaled $22.82 billion as of last year, with Korea investing $10.83 billion in Britain and Britain $11.98 billion in Korea. Britain is Korea’s second-largest trade partner among European Union countries.

Those present at the Jetco meeting included Minister of Trade, Industry and Energy Yoon Sang-jick, Minister of Science, ICT and Future Planning Choi Mun-kee as well as leaders of two Korean business lobby groups: Huh Chang-soo, chairman of the Federation of Korean Industries (FKI) and GS Group, and Park Yong-maan, chairman of the Korea Chamber of Commerce and Industry and Doosan Group. The 60 attendees from the British side included Stephen Green, Minister of State for Trade and Investment, and managers of leading British corporations.

Living up to the major theme of her European trip - which is “sales diplomacy” - Park devoted a large part of her three-day state visit to Britain to business deals involving Korean companies. A total of 11 memorandums of understanding (MOUs) in the financial sector took place across this British capital between financial authorities and private financial companies throughout the day. The combined financial resources dealt with in the MOUs amounted to an estimated $3 billion, according to Cho. The U.K., the world’s sixth largest economy, is No. 1 in the world in terms of inter-country bank loans and trading volumes of foreign currencies and stocks.

Seven additional MOUs were signed in the nuclear power plant, transportation infrastructure and energy-related technology sectors. Out of 16 nuclear power plants in operation in Britain, 15 outdated ones are set to be shut by 2023 and 10 new ones will be built by 2025, according to the British government’s plan. Korea hopes to win bids that are expected to take place within the coming three years and the MOUs signed Wednesday could work favorably for that, said Cho. “Some may argue there was no concrete and visible deal,” said Cho. “But you need to understand the nature of business practices in an advanced economy. Whereas the government assumes nearly full authority to order private corporations to open businesses with foreign counterparts in less developed countries, the government’s role is confined to laying a foundation for future business deals, leaving the final decision to private companies in advanced countries such as Britain.”

After the summit and luncheon hosted by the British prime minister, Park was set to continue her tight schedule later in the afternoon. She was going to visit Imperial College London, where a number of Koreans are studying technology and science, followed by a conversation with Koreans in London and a special premier of the London Korean Film Festival.

The president will fly to Brussels, the last destination of her eight-day European trip, Thursday morning.