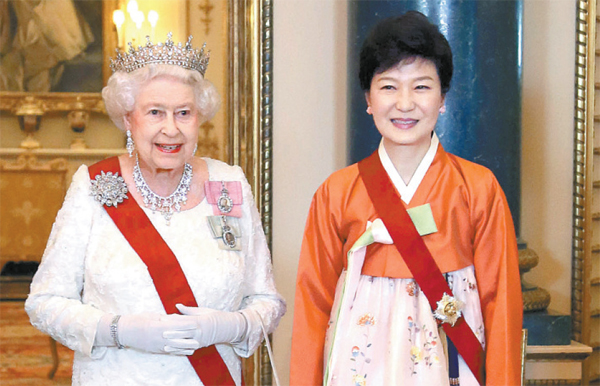 LONDON - Queen Elizabeth II hosted a swanky state banquet for President Park Geun-hye’s first night here on Tuesday following a day of pageantry for the Korean leader that included a 41-gun salute and a ride in a royal carriage.

The banquet, the highlight of the state visit, was held in the ballroom of Buckingham Palace, ornamented with a host of pink and orange flowers, where the Prince of Wales hosted a private meal for 300 to celebrate the royal wedding of Prince William and Kate Middleton in 2011.

President Park, in an orange and white hanbok, or traditional Korean dress, was greeted by the Queen, dressed in white and crowned with a tiara, and her husband Prince Philip before being escorted to a huge dining table in a horseshoe shape that seated 160 guests. Korea’s Minister of Foreign Affairs Yun Byung-se, British Prime Minister David Cameron and other British politicians were among the guests.

They were served a four-course meal that included trout, a pheasant that the Queen caught in a hunt, and chocolate tart with pear, along with five different wines from Britain, France and Portugal. An orchestra and bagpipers played through the event, which lasted over three hours.

Park said that the creative talents of the two countries could be brought together to unlock innovation here and there, toasting the Queen and the royal family as an embodiment of a “deep sense of duty that inspires respect in the Commonwealth and around the world.”

“Building on our many years of trust and friendship, Korea and the United Kingdom must now expand the reach of our partnership,” the president said. “We will harness our creative talent and many industries with culture. And we will thereby ignite new engines of growth.”

The Queen, toasting Park, expressed gratitude to Korea for a memorial to British forces who served in the 1950-53 Korean War, whose model was unveiled earlier in the day. She said Park’s state visit celebrates the countries’ links in international and economic affairs in particular.

“The United Kingdom has a proud tradition of innovation and creativity while Korea is admired globally for its technological expertise and the work ethic of its people,” she said.

All of the interactions “give cause for the highest confidence in this strategic partnership between two firm friends, now, and in the years to come.”