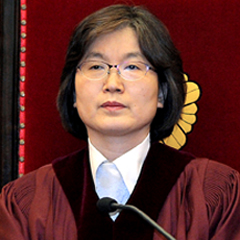 The Constitutional Court yesterday took its first step in deliberating the government’s petition to dissolve the Unified Progressive Party by appointing Justice Lee Jung-mi as the presiding judge in the case.

The court appointed Justice Lee as the presiding judge through a random electronic drawing following the Park Geun-hye administration’s petition to the court Tuesday to dissolve the UPP, the left-leaning minority party accused of having links to North Korea.

Using a random drawing system was seen as an exceptional move, as the nine justices were to discuss who should preside over the case. Sources from the court said the selection was made at random to avoid any misunderstandings in such a politically sensitive case. This is the first time in history the government has taken legal action to dissolve a political party.

Lee, 51, is one of the court’s longest-serving judges. Appointed in March 2011, she is the second woman to serve on the Constitutional Court and the only female member of the current bench. A native of Ulsan and a graduate of Korea University, she was named to the post while serving as the senior judge of the Daejeon High Court.

While the petition to dissolve the UPP was not scheduled to be deliberated today, researchers at the Constitutional Court said they are paying close attention to the case.

“We were told that all 70 of the researchers at the court could be assigned to work together on the case,” said one researcher. “It is an unprecedented step, one that didn’t even happen during deliberations for President Roh Moo-hyun’s impeachment in 2004.”

The justices were restrained in their reactions to the proceedings.

“The presiding judge was just decided,” said Justice Kim Chang-jong. “The Constitutional Court will consider it with serious responsibility.”

Justice Kang Il-won also said the case will require time. “Because we have rarely seem such precedents [in other countries], we need to have adequate time to consider this,” Kang said.

It took four years for the German Federal Constitutional Court to issue a verdict banning the Communist Party of Germany in 1956, and experts said the court could take longer than the 180 days it has for deliberations.

The petition is one of the most politically sensitive and controversial cases for the Constitutional Court to deliberate, and the ruling inclinations of the justices are not immediately obvious.

While the Constitutional Court justices are generally believed to have conservative inclinations, court sources said justices Kim Yi-su, Kim Chang-jong and Lee Jung-mi, who was appointed as the presiding judge, tend to hand down progressive rulings.

“The three justices made relatively flexible rulings [in the past],” said a lawyer who specializes in constitutional cases.

Chief Justice Park Han-chul, who served as the head of the public security unit of the Supreme Public Prosecutors’ Office, has made conservative rulings in the past.

Justice Ahn Chang-ho, a former prosecutor who worked in the public security unit, has also leaned in that direction.

“Judges often make conservative rulings in national security cases,” said professor Lee In-ho of Chung-Ang University Law School. “But this is an unprecedented case that will bring about an enormous aftermath, so their conclusions in this case could be different from their usual inclinations.”

Experts said the court’s first step in the deliberations will be to decide whether it is constitutional for the government to ask the court to rule to strip the UPP lawmakers of their National Assembly seats.

The Ministry of Justice asked the court Tuesday to strip the six UPP lawmakers of their posts inside the legislature and filed an injunction to suspend the UPP’s activities for the time being.

There is no legal clause that states that the Constitutional Court has the right to judge the lawmakers’ statuses, but the government argued that the court’s right to decide a political party’s dissolution includes such authority.