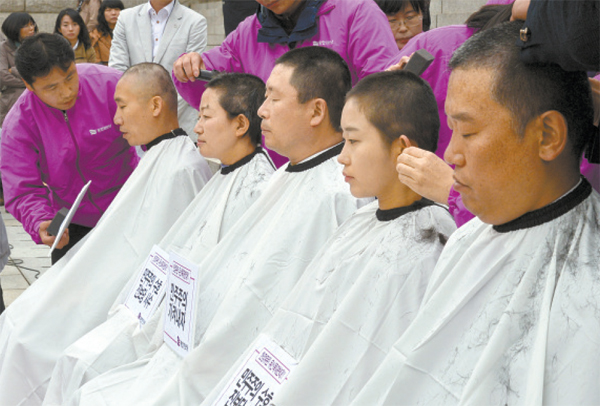 Five out of six lawmakers of the Unified Progressive Party, except for Lee Seok-ki, who is on trial for subversion, have their heads shaved in front of the National Assembly yesterday in a protest against the government’s decision to ask the Constitutional Court to dissolve their party. [NEWSIS]

Lawmakers of the Unified Progressive Party yesterday shaved their heads and started a hunger strike to protest the Park Geun-hye administration’s move to dissolve the party.

The third-largest party in the National Assembly yesterday held a protest in front of the legislature’s main building and condemned the government’s unprecedented attempt to quash the party.

On Tuesday the government asked the Constitutional Court to dissolve the minority political party, saying its dedication to North Korea threatened the South. Senior members of the party, including Representative Lee Seok-ki, were indicted in September on charges of conspiring to overthrow the government by creating an anti-state underground group. Because Lee is detained while being tried, he was unable to attend yesterday’s protest.

“The government called us a threat to the Constitution,” Representative Kim Mi-hyui said at the protest. “But the UPP has never blindly followed North Korea and never acted under its orders.”

Representative Kim Jae-yeon, a proportional representative of the UPP, said, “Please fight against the Park dictatorship’s attempt to destroy democracy. We, the UPP lawmakers, will fight to the death.”

The party also scheduled a candlelit protest in front of Seoul City Hall at 7 p.m. yesterday.

The UPP was formally launched on Dec. 5, 2011, through a merger of progressive political groups, including the Democratic Labor Party (DLP) and the People’s Participation Party. Until May 2012, the party was co-chaired by Rhyu Si-min, a leader from the People’s Participation Party, Lee Jung-hee from the Democratic Labor Party and Sim Sang-jeong from the New Progressive Party.

In the April 2012 general election, the UPP managed to win 13 seats, becoming the third-largest power inside the National Assembly.

From its very start, the party provoked controversy. At its launch ceremony on Dec. 11, 2011, former DLP members refused to follow the custom of taking a pledge of allegiance or sing the national anthem.

Controversy was reignited in May 2012 after Representative Lee Seok-ki said he disapproved of Korea’s national anthem.

The UPP’s stand on North Korea also invited criticism. When the North fired a long-range rocket in April 2012, the international community strengthened its sanctions on the country. A UPP statement said, “The series of sanctions by the United Nations Security Council and the United States do not help ease tensions on the Korean Peninsula.” The party did not criticize the North for the launch.

When the North fired another long-range rocket last December, allegedly to put a satellite in space, the party also defended the action. “It is outrageous to talk about sanctions on the North for launching a satellite,” it said.

After the North conducted a third nuclear test last February, the UPP issued a statement saying, “It is absurd that the United States, which conducted 1,000 nuclear tests, receives no sanctions, while only the North is being sanctioned.” When the National Assembly voted on a resolution to condemn the nuclear test, all UPP lawmakers boycotted the session.

In 2012, seven of the party’s lawmakers defected after allegations were raised to a rigged primary before the April 2012 general election that favored pro-North candidates for the proportional candidate seats.

Criticism snowballed that the primary was rigged to allow Lee and Kim, both accused of having pro-Pyongyang backgrounds, to become lawmakers. As a result, the seven lawmakers, along with many other members, left the UPP in September 2012, protesting the dominance of the pro-North faction.

After the split, the UPP fielded its chairwoman, Lee Jung-hee, as its candidate in the December 2012 presidential election. She said in a TV debate that she was running in the race “to stop Park Geun-hye from winning,” inviting a lot of criticism.

The UPP’s pro-Pyongyang views became front page news when the prosecution began an investigation into key members conspiring to overthrow the government by forming an anti-state group, known as the RO, which stands for Revolutionary Organization. In September, the National Assembly approved a motion to allow Representative Lee Seok-ki’s arrest. Following an investigation, Lee was formally prosecuted later in the month.

Following the scandal, public demand to dissolve the UPP grew. In a survey conducted by the JTBC and Realmeter in September, 63.9 percent of the public said the UPP should be dissolved. In the same month, a JoongAng Ilbo poll also showed that 61.7 percent of the people want it to be disbanded.

“The crisis of the UPP is an outcome of accumulated public disappointments over its pro-Pyongyang scandals,” said Lee Joon-han, a professor of political science at the University of Incheon. “They brought it upon themselves.”