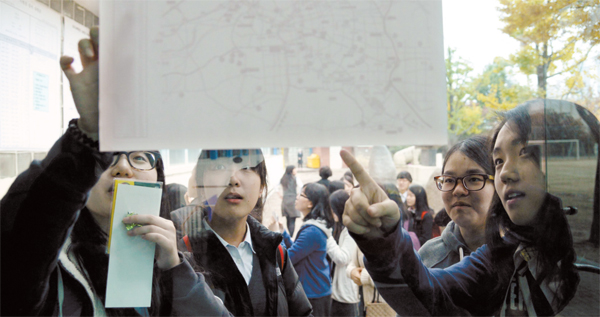 High school seniors find their places on a seating chart at Namsan High School in Daegu yesterday, a day before the College Scholastic Ability Test. About 650,000 test takers across the nation gathered for an orientation session at the schools where they will take the CSAT today. [NEWSIS]

Korean students today are taking the most important exam of their education thus far, and the country has once again prepared itself for this year’s College Scholastic Ability Test by creating an optimal test-taking environment.

Aircraft are banned from flying near test sites, and working hours begin an hour later at many state-run companies and major conglomerates to prevent traffic jams.

Year after year, the scenes of police escorting tardy students to test locations and mothers praying outside the gate have become all too familiar in education-obsessed Korea.

However, there is one lesser-known test-preparation custom that failed to draw the same kind of attention amid the exam frenzy this month: buying a good luck charm.

This, perhaps, represented a more desperate, if not obvious, effort to succeed than participating in more conventional activities, such as praying at churches and temples.

On a recent afternoon, hordes of parents - mostly mothers - waited in line to purchase one at a small fortune-teller shop in Nam District, Daegu.

“I came from Miryang, South Gyeongsang, because I heard that the paper talisman works miracles,” said one middle-aged woman, who refused to give her name. “It cost me 300,000 won ($283).”

“I think it’s a bit expensive because typical items [here] sell for around 50,000 won,” she added. “But I bought it because the test will determine the future of my child.”

A fortune teller at the same shop admitted that her business takes off as exam day nears.

“Since there are so many customers asking for the talisman, I had to adopt a reservation system. This year is already fully booked,” said the woman, who also refused to give her name.

As for the price, she said that the cost of her papers was not exorbitant given that “there is a [another] fortune-telling house that sells a talisman for 1 million won.”

Objects from the on-site shop are regarded as upscale compared to the good-luck items sold online.

In fact, thousands of online sites tout the effectiveness of their charms.

The price for lower-tier charms averages between 8,000 won and 15,000 won. More specialized “online shopping malls” only sell second-hand talismans, which cost between 15,000 won and 30,000 won. Those sites generally charge more because they claim the luck of first-time users - whom the sites advertise as “successful test takers” - adds to the value.

Some blog sites even followed suit, providing instructions for students to make their own paper talismans. This year, food items aimed at helping or comforting students also proved popular with test takers and parents, and a wide range of inventive products hit both online and offline markets. Though, some staple items, like chocolate and the traditional candy yeot, were less prominent.

Portable oxygen cylinders also sold well in the run-up to the exam as students sought to enhance their cognitive abilities.