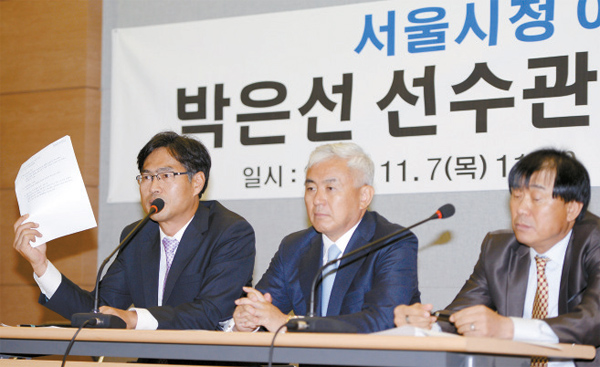 
The Seoul City Amazones, the team that employs striker Park Eun-sun, demanded that six of the football coaches in the women’s K-League apologize to Park for requesting that she take a gender examination as part of their attempt to have the 26-year-old kicked out of the league. The Amazones said the request is a serious human rights abuse and warned that they will consider taking legal action if the coaches don’t withdraw their demand.

Six of the seven teams in the women’s K-League - except the Amazones - came under fire for saying that Park, who is 180 centimeters tall (5.9 feet) and weighs 74 kilograms (163 pounds), needs to take a sex test because her gender wasn’t clarified when the issue was first raised before the 2010 Asian Cup event. At that time, the Chinese team said they would ask the event’s organizing committee to conduct a gender test on Park if Korea brought Park to the event. Then, Korea dropped Park from the team instead of making a strong complaint against China.

In October, the six coaches agreed to ask the Korea Football Association to ban Park from playing until her gender is verified, but fans and people in football criticized the move, saying the coaches want to get rid of the league’s best striker so they can win more games. The KFA is also under fire for its poor management of the issue.

“We officially demand the [six] coaches make a sincere apology to Park,” Kim Jun-soo, secretary general of the Seoul Sports Council, which manages the Amazones, said in a press conference in Jungnang District, central Seoul. “Demanding a gender examination on a person is a serious human rights violation that insults someone’s character. Park had already gone through this gender examination thing with the KFA when she was selected as a member of the Korean national team in the 2004 Athens Olympics and also appeared in several other international events.”

Kim continued, “And one ridiculous thing is that the KFA failed to save the test result that was done in 2004. We requested the KFA open the document to the public to clarify this issue, but KFA told us Wednesday that they lost it.” When the issue was raised this week, the coaches backed off, saying it is true that they have gossiped about Park but never made an official request. However, Kim produced papers that shows the issue was discussed as an official agenda item at the coaches’ meeting in October.

Kim said that Park will not take another gender test for the KFA but said she would take one if another country makes such a request when she participates in an international event. Kim added that the Amazones have asked the National Human Rights Commission to inspect the issue.

“I can’t believe this is happening,” said, Seo Jung-ho, coach of the Amazones. “I have seen her for 13 years and I didn’t see a thing that makes me to consider Park as a man. I know it and her teammates who shared a room at the team’s lodging know it. Anyone in football circles should feel sorry for her if they ever have suspected such a thing because our team became a winning team in the league.”

“She is trying to take this with fortitude,” said Seo, who has been speaking to Park as he fears she will end her career.